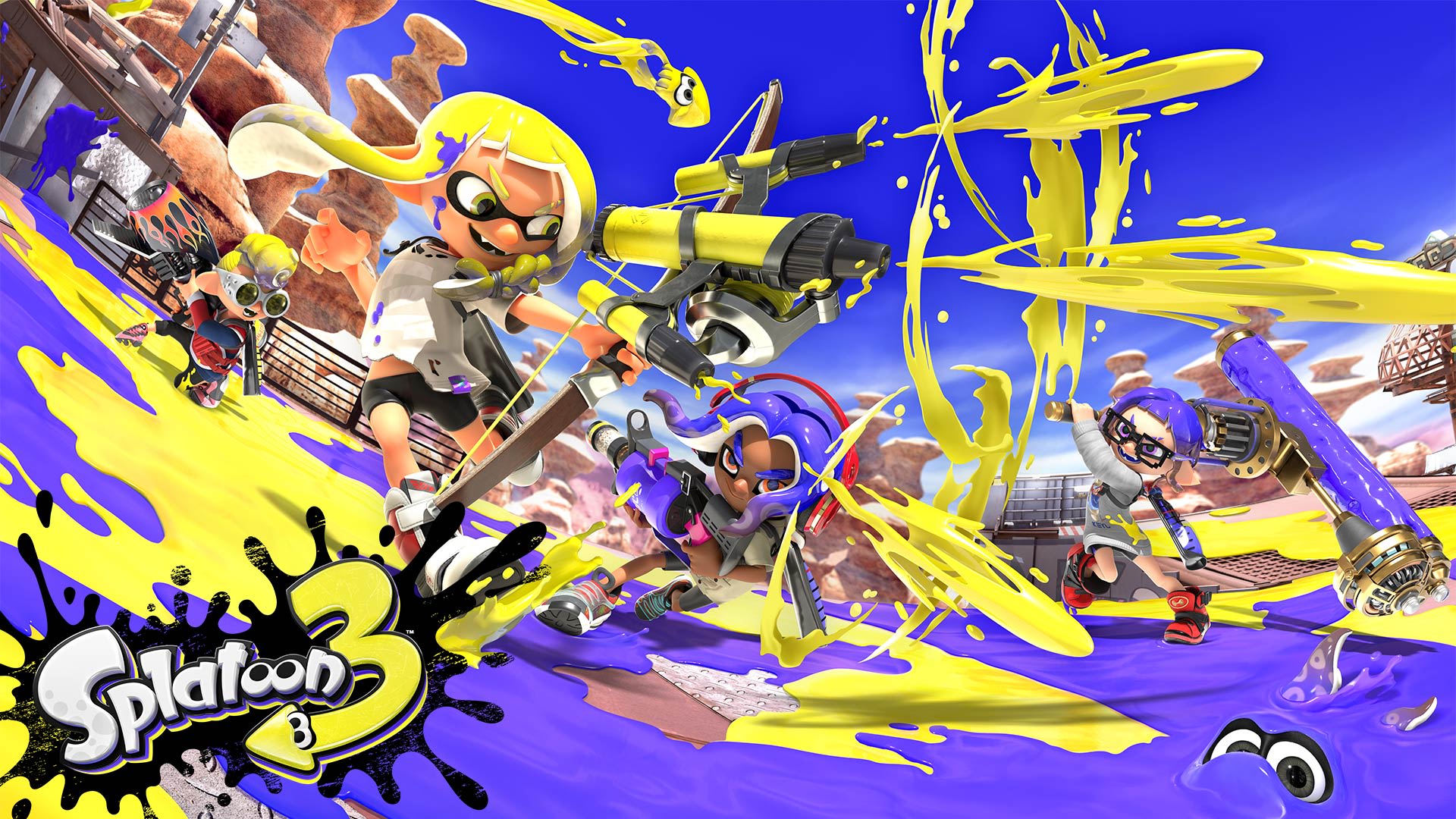 SRL here! New Splatoon 3 details were just announced via video transmission. In addition to some exciting Turf War footage, we also got our first look at the single-player story mode. Check it out!

The theme of the Splatoon 3 story mode appears to be "Return of the Mammalians." Wha?! As far as we know, mammals have disappeared from the surface of the planet (minus a couple cool cats, of course). What does it mean for these Inklings?

This Splatsville youth and trusty little Smallfry buddy are scrap hunters who search for junk gems by day and splat it up in Turf Wars on the side. It seems this Inkling met the New Squidbeak Splatoon and is now their new Agent 3 in the continued fight against the evil Octarians!

This is the Hero Suit worn by the new Agent 3. It's flexible enough to bust sweet moves in, yet it can withstand the harsh conditions in the Splatlands. Little buddy even fits in the pack! We noticed two styles in the video. Perhaps they're each suited to different situations?

This is a soldier in the evil Octarian Army that is planning an invasion of the squid world. That said, this one isn't like those we've observed before... It appears to be growing furry hair! Why would a marine creature grow stuff like this? We must investigate further!

This intriguing structure appeared at the end of the video. It's quite different from what we've seen of the Splatlands so far. All we know is that it's located somewhere within "Alterna," where this story mode takes place. Its purpose remains unknown, for now...

This mysterious substance found in Alterna is called Fuzzy Ink. It pulsates like a life-form, but it doesn't actually seem to be a living creature. It appears to be partially covered with brown furry stuff, leading us to suspect some kind of connection with that hairy Octarian...

We have learned a terrible truth. If an Inkling comes into contact with Fuzzy Ooze, some manner of brown hairy fur-like substance grows all over their body, and they lose their sense of self. In this state, they're unable to do much but hopelessly roll around...

In less terrifying news, we've learned that Smallfry aren't affected by Fuzzy Ooze. In fact, they can eat it and clean it up! Seems like these little buddies might just be the key to solving the mysteries of Alterna.

Apparently Smallfry will bite at Octarians to attack them, activate helpful contraptions, and assist Inklings in various other ways. They may be small, but they're seeming more and more like a brave and reliable sidekick!

This is the New Squidbeak Splatoon who work together undercover to defeat the evil Octarian Army. On the left is Agent 1, on the right is Agent 2, and in the middle is their captain. Their true identities are a secret, and they'll do whatever it takes to support the new Agent 3.

Psst... Just between us, when Agents 1 and 2 aren't saving the squid world, they're Callie and Marie of the ever-popular musical group, the Squid Sisters! Take a look at one of their fresh live concerts here: https://youtu.be/wxkKUbNnXKE

This elderly Inkling is Craig Cuttlefish. He was once captain of the Squidbeak Splatoon and is a true hero of his day. He recently retired from active duty and passed on his captain's hat to a brave new leader. No slouch, he's still patrolling the squid world though. What a guy!

We've discovered a new stage known as Eeltail Alley! An old neighborhood in the center of Splatsville, it's become a popular hangout for the town's young folk. With a walkway spanning up and over the area, this is surely a dynamic location for Turf War battles!

This stage below is the Museum d'Alfonsino from the Inkopolis area. It seems a sophisticated transportation network makes it possible to join Turf Wars there. It's a large museum with lots of exhibitions, including ones currently featuring indigenous artifacts and modern art.

Next, we have Scorch Gorge, a stage seen in the previous video. We hear the strange rocks that rise up like chimneys were once undersea hydrothermal vents that now appear on land due to changes in the planet's surface. This area is also designated as a national park and quite popular.

Now let's dive into the new special weapons seen in the video. This is the Crab Tank! When piloting this multilegged vehicle, you can attack with a powerful rapid-fire gun and a cannon with a wide blast area. You can also turn into a ball to move around faster than crab walking.

This is the Big Bubbler. It's a modified version of a special weapon popular in Inkopolis. By making it fixed, the size has been greatly increased! It seems Inklings in the Splatlands think bigger is better. Well, this certainly does look useful for protecting one's allies!

This special weapon turns an Inkling into a shadowy warrior called a Zipcaster. With tentacles that stretch way out and stick to walls, you can zoom around and cause mad chaos! To conceal your identity, when the ink runs out, you'll be returned to where you first transformed.

This weapon was seen in the video, and we've learned new details! It's called the Trizooka and seems like a modified version of a special weapon once popular in Inkopolis. It has a powerful shot that fires three blasts at once and can be fired three times in total each use!

This is the Killer Wail 5.1. It also appears to be a modified version of a special weapon from Inkopolis. The six floating megaphones move autonomously and attack with lasers that chase enemies. For such a dusty place, it seems the Splatlands are brimming with shiny tech!

C-Side is a grungy, rebellious trio that reps hard for the Splatlands. Growing up without formal musical training hasn't caused them to miss a beat, and they've risen to the surface on their ambition and attitude alone.

We discovered a demo version of C-Side's hit track, Clickbait! This song rips with Splatsville spirit. With an electrifying rhythm and supercharged guitar, this jam sounds like a band at the top of their game!

That's all the new Splatoon 3 info we have at this time. But don't despair! Our research never stops. We'll be back in touch as soon as we have more to share. SRL out!