RWBY: Grimm Eclipse is a co-op, hack-and-slash game for up to four players based upon Rooster Teeth’s international hit series RWBY. Join your friends in intense combat action as one of eight students of Beacon Academy and stop the evil forces of the Grimm and Doctor Merlot. Level up your favorite RWBY character and traverse Remnant in new storylines or the Grimm Gauntlet mode.

BECOME THE ULTIMATE TEAM
Team up with your friends in either two-player couch co-op or four-player online co-op and utilize powerful team attacks.

PLAY AS YOUR FAVORITE CHARACTERS
Play as Ruby, Weiss, Blake, Yang, and Team JNPR and unlock each character’s unique abilities and upgrades.

CUSTOMIZE YOUR STYLE
Want to fight in the new Volume 7 outfits? Wonder what it’s like to run around Remnant in pajamas? Maybe you’d prefer to try out the exclusive, never-before-seen Power Armor? No matter your style, there’s plenty of outfit options for every RWBY fan.

IMMERSE YOURSELF IN THE WORLD OF RWBY
Experience an exclusive and fully canon storyline with full voiceover from the cast of the show and an original score from RWBY’s composer.

Recruit your friends and team up to save Remnant! 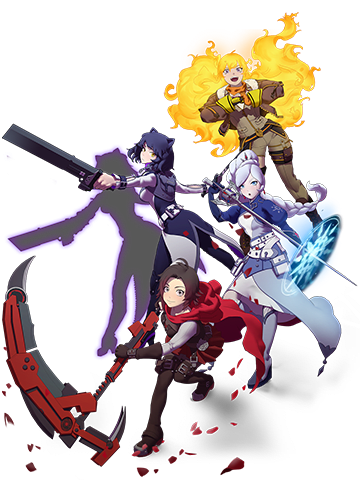 © 2021 ROOSTER TEETH PRODUCTIONS, LLC, ALL RIGHTS RESERVED.
All other trademarks belong to their respective owners.
All rights reserved.