Blast through the defense and go for the touchdown with uppercuts, tornado kicks, and thunder bombs! Jump into the arcade action in Season Mode and power up every pass, kick, and tackle. Take your team online against other players in real-time multiplayer. Battle your friends on the same screen or over Local Wireless to find out whose team reigns supreme.

Grow your team from a roster of low-level rookies into a squad of powerful Football Heroes. Check back often in the Free Agency to pick up stronger players, then train them to unlock their full potential and powerful new Super Moves. Fumble Tackle your foes, Ice Uppercut that pesky cornerback, or Electric Bomb a hole through the offensive line for a QB sack! Got a crowd of defensive tackles on your kick returner’s heels? Teleport into the shadow realm and pass right through them! Do you have the skills and grit to build the ultimate football team?

> Arcade football action - turbo, tackle, punch, and spin your way down the field
> Use Super Moves to gain the advantage over your opponents - Ground Pound the defense off their feet, Slow-Mo Kick the perfect field goal, and Rocket Boost into the endzone
> Battle other teams in multiplayer or Season mode as you work to build the ultimate football team
> Customize your team - choose your own logo, city, name, and even pre-game trash talk
> Level up your players and team through playing games and earning experience on the field
> Over 280 Football Heroes to collect with unique stats and Super Moves
> Play with a friend on the same screen or over Local Wireless!
> Play oline to take on other player’s teams in fierce head-to-head battle
> Season mode: take on CPU opponents and beat the titans of football to become the ultimate football master! 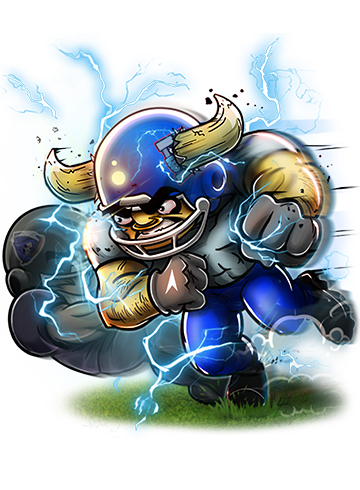