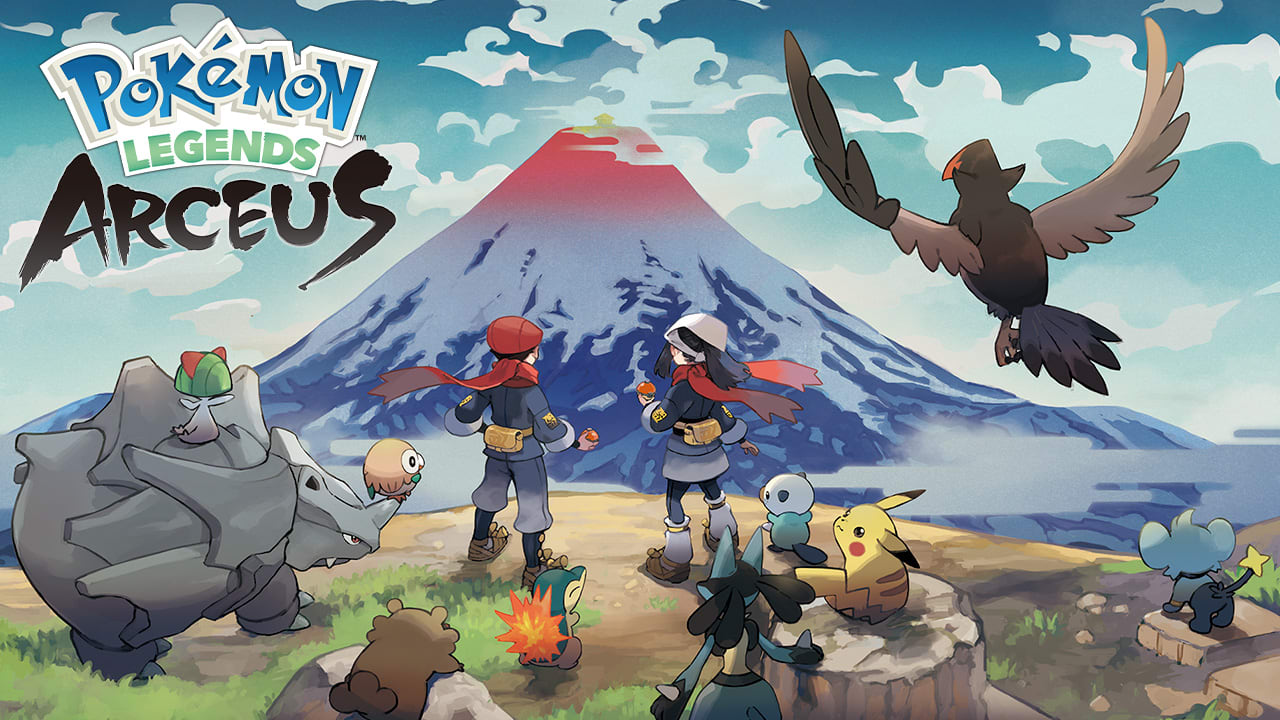 Get ready for a new kind of grand, Pokémon adventure in Pokémon™ Legends: Arceus, a brand-new  game from Game Freak that blends action and exploration with the RPG roots of the Pokémon series.

As you embark on survey missions in the ancient Hisui region, you will explore natural expanses to catch wild Pokémon by learning their behavior, sneaking up, and throwing a well-aimed Poké Ball™. You can also toss the Poké Ball containing your ally Pokémon near a wild Pokémon to seamlessly enter battle.

So what mysteries will you uncover in the wild? How is the Mythical Pokémon, Arceus, involved? The answers are out there in the Hisui region!

Travel to the Hisui region—the Sinnoh of old

Your adventure takes place in the expansive natural majesty of the Hisui region, where you are tasked with studying Pokémon to complete the region’s first Pokédex. Mount Coronet rises from the center, surrounded on all sides by areas with distinct environments. In this era—long before the events of the Pokémon Brilliant Diamond and Pokémon Shining Pearl games—you can find newly discovered Pokémon like Wyrdeer, an evolution of Stantler, and new regional forms like Hisuian Growlithe, Hisuian Zorua, and Hisuian Zoroark! You’ll see what life was like before Pokémon and people lived together in harmony.

After meeting Professor Laventon, you'll join the Galaxy Team and get to work as a member of the Survey Corps. Your goal will be to meet every species of Pokémon in the region.

After receiving an assignment or a request and preparing for your next excursion, you'll set out from Jubilife Village to study one of the various areas of the Hisui region. There may be certain Pokémon behaviors—or even entire species—that you witness only under the right conditions, such as during a particular time of day or in certain kinds of weather. Word has it that some Pokémon even act in ways that are unique to their species!

Also, keep an eye on your health while out adventuring—take too much damage from wild Pokémon attacks or falling from high places and you’ll be unable to go on.

A new kind of battle

Battles in the Hisui region also have some unique properties. For the first time in the series, your Pokémon unleash moves with the speedy agile style or the powerful strong style. These styles might also affect how many turns Pokémon can take in a row.

You’ll also encounter noble Pokémon, special Pokémon in the Hisui region that have received a mysterious blessing. These nobles are particularly powerful and are revered by the people of the region, but some strange phenomenon is causing them to fly into a frenzy. To quell them, you will have to hit them with balms made from these noble Pokémon’s favorite foods.

The Hisuian Growlithe Kimono Set and a Baneful Fox Mask will be gifted to early purchasers of the Pokémon Legends: Arceus game. You can receive it by choosing “Get via internet” in the Mystery Gifts* feature in your game, up until May 9, 2022 at 4:59pm PT. Additionally, players who purchase and download the game before May 9, 2022 at 4:59pm PT from Nintendo eShop will get an email with a code for 30 Heavy Balls which can be redeemed through the Mystery Gifts* feature until May 16, 2022 at 4:59pm PT. Heavy Balls have a higher catch rate than regular Poké Balls—just remember that you can’t throw them quite as far.