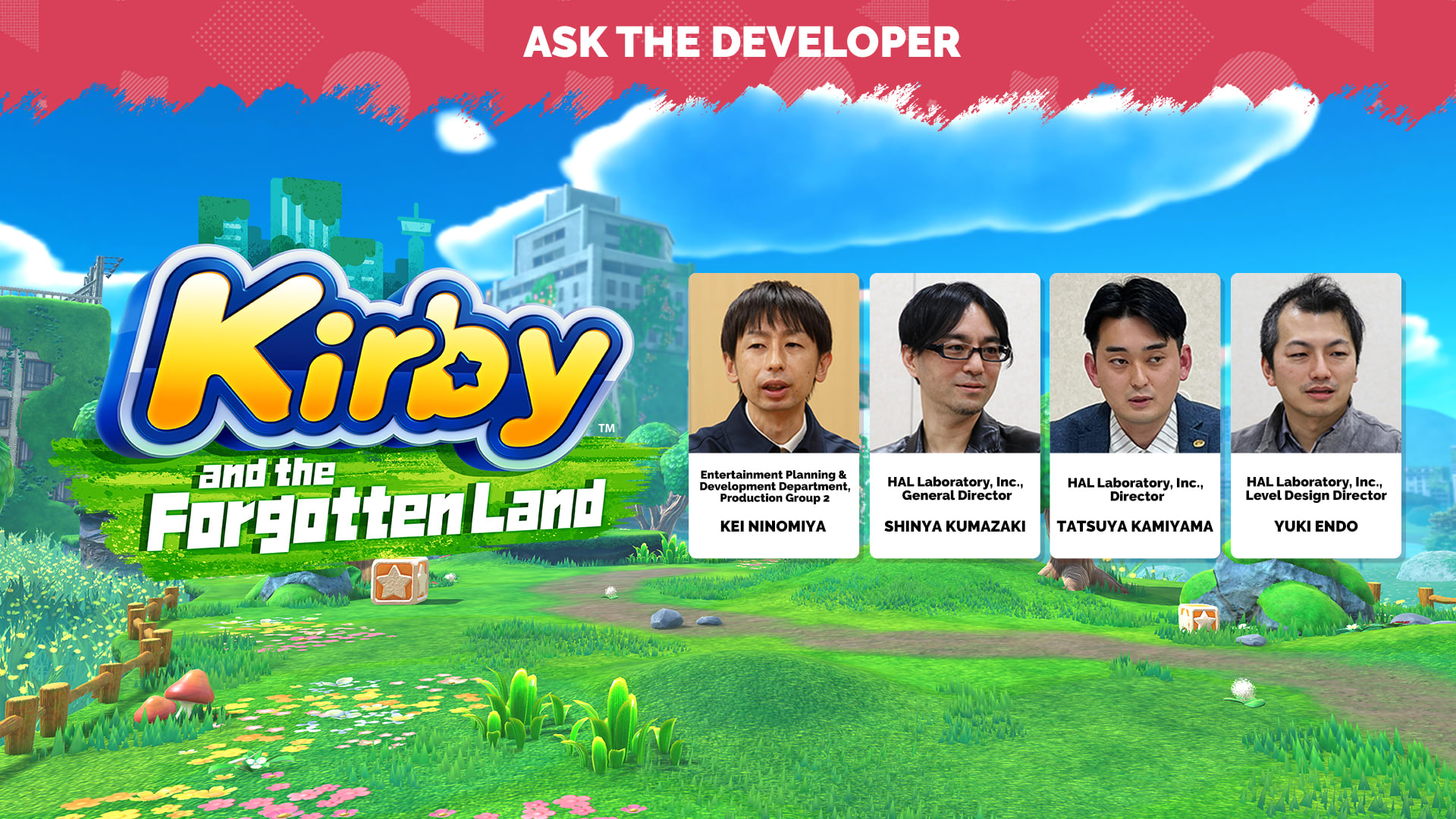 Ask the Developer Vol. 4, Kirby and the Forgotten Land–Part 2

Part 2: I can't believe this is the first mainline 3D Kirby title!

You mentioned that, as part of this transition to 3D action, you had to increase the density of elements in each stage, which meant the enemy difficulty needed to be adjusted to match. Did you also have to make adjustments to the way Kirby attacks?

Ninomiya: We made adjustments so that the stresses players might feel as they attack enemies would be reduced.

Kamiyama: I know we mentioned that it can be hard to tell which way Kirby is facing in 3D, but for Kirby's Blowout Blast™(5), a small-scale 3D action game where players could inhale enemies and spit them back out, there was an arrow to show where you were attacking. 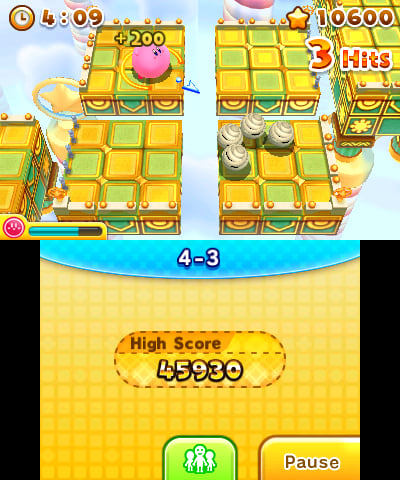 In this Kirby game, however, always pointing forward with an arrow made it feel like you were controlling the arrow, not Kirby. We had to think of a way to easily control and aim Kirby without the arrow's help. Now, if it looks like an attack "should" hit on-screen, we made sure it does connect—even if it is going to narrowly miss.

The game accounts for the player's perspective by tracking the positions of Kirby and the camera. It then maps out a range in which attacks may appear to land. If an attack is within that range, the attack will hit. By doing so, even people who are not so good at 3D action games can attack enemies without any stress. You would move around a 3D space while inhaling and spitting out enemies to get a high score.

(5) The side-scrolling 3D action game based on Kirby: Planet Robobot, released in July 2017 for Nintendo 3DS™.


So you adjusted it to make sure that the attacks players think are a "hit" will become a "hit" to make players feel satisfied?

Kamiyama: Talking about the adjustments, the actions associated with the Copy Ability that Kirby uses also needed to be adjusted so it would be easier for players to enjoy in 3D. Even long-established Copy Abilities like Sword or Fire were redesigned from scratch to help players feel satisfied.

Ninomiya: In 3D games, it's often hard to precisely grasp the distance in the anterior direction, and therefore it's hard to correctly hit an object. However, for this Kirby game, I believe players can comfortably hit the objects because of the measures we've taken.


So you implemented many technical details that were designed to make the experience more satisfying for players?

Kumazaki: There are details like that all throughout this game, right?

Endo: It's a term we came up with during this game's development. (Laughs) 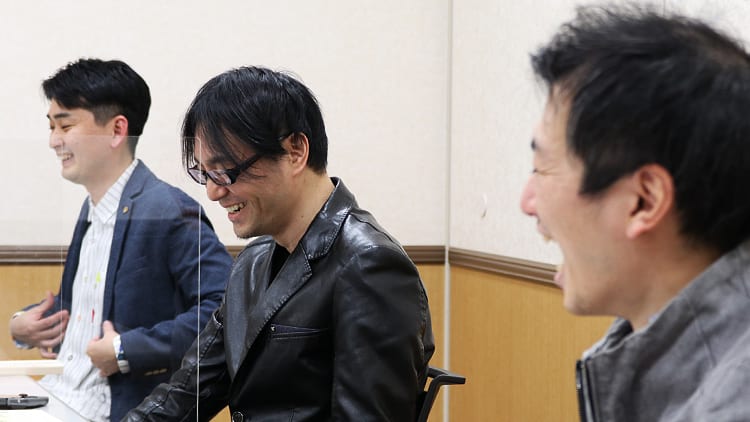 Kamiyama: It can be hard to adjust your position midair and stick a landing in 3D games. Let's say you're looking at a top-down view of Kirby. You're coming down from a jump, and you want to immediately jump again. You thought you landed and so you press the A Button, but you actually didn't land and end up hovering by accident. Therefore, we made a fuzzy adjustment so that the system treats Kirby as if he's already landed if the A Button is pressed at a close distance to the ground.

Even if you misjudge the distance and press the A Button too soon, the game allows you to "land" and jump successfully. This adjustment made general movement more satisfying, just like your changes to aiming attacks.

Endo: To further streamline those areas, we also adjusted camera movements and map designs. In this game, the camera moves automatically. It always shifts to the optimal view for the actions you need to take, whether you're looking down at Kirby from above or seeing him from a specific side angle. This makes it easier for the player to move forward even when there are obstacles. To make the game easy to enjoy, we also talked with our designers and worked on the decorations on the maps. To make sure players could easily tell the differences in height among buildings and obstacles, we marked some surfaces with fluorescent tape that matched the world's aesthetic.

Kumazaki: When we told our team, "This one section is still a bit hard to grasp," the graphics lead and the play-mechanics lead got together right away to review each individual instance and make adjustments.

Endo: If you ask me what makes 3D games hard for beginners, I think the answer is in the camera controls. In this game, the player doesn't need to control the camera—the camera moves for you. So players don't need to worry about controlling the camera and action at once. Also, the camera automatically displays landmarks in the direction you're supposed to travel, and points in the direction you need to go—even while you're freely exploring back and forth—to ensure that you don't accidentally go back the way you came. It's our way of telling the player, "This is the true path forward!" 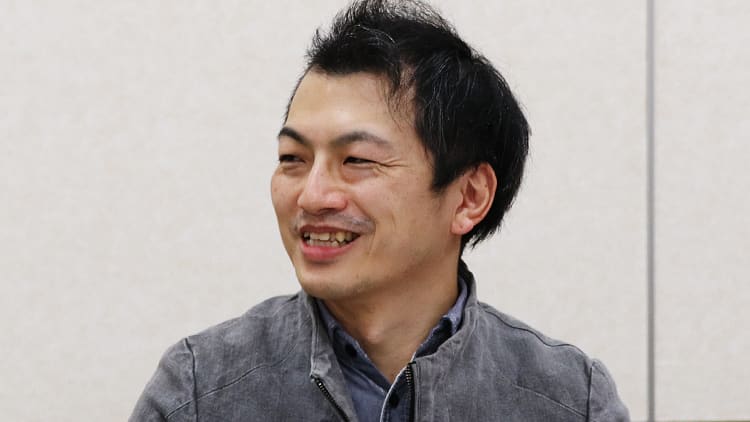 Kamiyama: The automatic camera, which doesn't rely on the player to control the camera, was the result of our search to streamline the game for players. Also, by allowing our level designers to direct the camera in each area, we were able to merge camera and gameplay into one cohesive experience.

Endo: Limiting the range of on-screen elements with a guided camera makes it easier to plan your actions. "I'll solve this one puzzle first, then take out those enemies over there..."

Ninomiya: Aspects like camera movement, aiming attacks, and enemy placement were all thought through and designed by HAL Laboratory staff to make the game more accessible for all players.

Kumazaki: When Mr. Ninomiya said, "I can't believe this is the first mainline, 3D Kirby title!" I was ecstatic as we were hoping to create something like that.