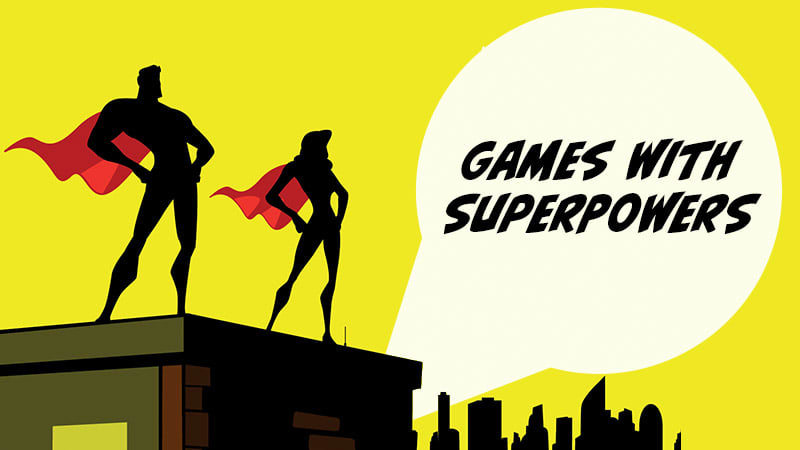 Superpowered games to practice your heroics (and a bit of villainy)

If you could have any superpower, what would it be? Do you want to soar through the air with the power of flight? Would you want to lift large objects with super strength? Or perhaps you’d like to shoot ketchup out of your hands?

(Well, you could want that…)

If you’re looking to power up with some superhuman feats, check out these games! We can’t promise the ketchup thing, but you will find a wide range of superpowers, heroes, and villains within.

Join the fight as Wonder Woman, Supergirl, and Batgirl from the animated series DC Super Hero Girls, and save Metropolis from the tinkering terror of Toyman! With the city in danger, even frenemies like Harley Quinn, Catwoman, and Star Sapphire will need to band together to help protect the town.

Assemble your ultimate team of Marvel Super Heroes from a huge cast including the Avengers, the Guardians of the Galaxy, the X-Men, and more! Team up with friends* to prevent galactic devastation at the hands of the mad cosmic tyrant Thanos and his ruthless warmasters, The Black Order.

Join some of your favorite Marvel Super Heroes and Super Villains from different eras and realities as they go head-to-head with the time-traveling Kang the Conqueror. You’ll be able to play as the Guardians of the Galaxy, Spider-Man, Thor, Hulk, Black Panther, Captain Marvel, Doctor Strange, Green Goblin and dozens of other Marvel Super Heroes and Villains in this cosmic battle.

Set in an open world experience within the DC universe, the Justice League has disappeared, leaving Earth's protection to their counterparts, who have proclaimed themselves as the "Justice Syndicate". It's up to you and a crazy group of misfits to uncover the intentions of Earth's new, strange, wannabe superheroes.

A team of heroes from around the world must unite to protect the earth from vicious alien invaders! This band of 100 Wonderful Ones works together using their fantastic abilities to create a variety of forms. Whether it be a giant fist or a sharp blade, they’ll use their wits and power to overcome the enemy’s pitfalls and perils!

Enter the fractured psyche of Bruce Wayne and discover the powerful and far-reaching consequences of your choices as the Dark Knight. In this gritty story, you'll make discoveries that will shatter Bruce Wayne's world, and shake the stability of a corrupt Gotham City to its very foundations.

After a catastrophic alien invasion, the Saints have been transported to a bizarre simulation of Steelport. With homies new and old at their side, and an arsenal of superpowers and strange weapons, they must fight to free humanity from alien granddaddy Zinyak’s mental grasp.

Fight in a cosmic war in Fortnite Chapter 2 Season 7: Invasion. Alien forces have infiltrated the Island while Doctor Slone leads the IO forces against them. As the season progresses, you may see a familiar superhero/journalist dropping into battle…