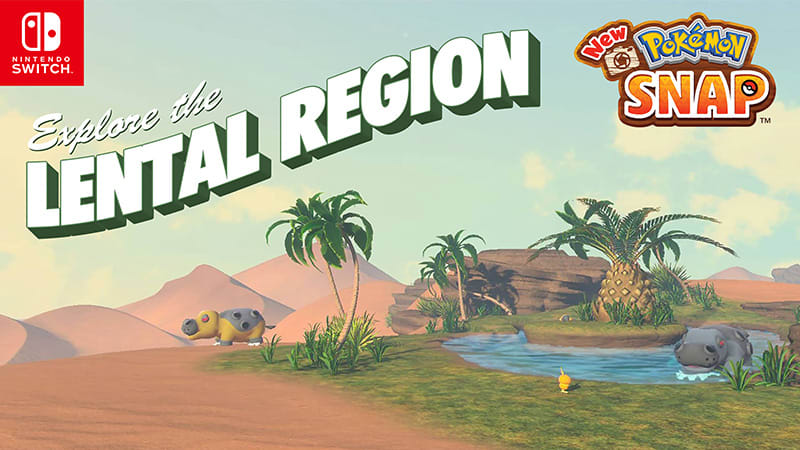 Calling all Pokémon Trainers and photographers alike! The launch of the New Pokémon Snap game for the Nintendo Switch system is just around corner on April 30, and players will be able to get an early look at what’s to come with a new interactive site.

The Explore the Lental Region site* launches today and offers details about the Lental region and its wild Pokémon. Trainers and curious players can click through eight spots on the site’s map to learn about different Pokémon interactions and habitats in the game. They can also earn My Nintendo Platinum Points** along their journey, which can be redeemed for various rewards, including upcoming New Pokémon Snap items.

Each of the eight locations also offers a special digital photo frame available only on the site, inspired by different parts of the Lental region. Trainers will be able to decorate their selfies with these colorful frames and download them directly to their device. The Lental region tour doesn’t need to be completed in a single session, so feel free to visit the Explore the Lental Region site multiple times.

New Pokémon Snap features islands teeming with untouched nature – from dense jungles to vast deserts, all home to different wild Pokémon. Players will take on the role of a budding Pokémon photographer and work with the Lental region expert, Professor Mirror, and his assistant, Rita, on an ecological survey to photograph Pokémon thriving in their natural habitats. Along the way, players can capture Pokémon behaviors that aren’t normally seen! Professor Mirror will evaluate their photography prowess as they investigate the mysterious Illumina phenomenon and build their very own Pokémon Photodex.

New Pokémon Snap launches in stores, in Nintendo eShop on Nintendo Switch and on Nintendo.com on April 30 at a suggested retail price of $59.99. For those who want to begin snapping Pokémon photos as soon as the game launches, pre-orders are available now. To learn more about New Pokémon Snap, visit https://www.nintendo.com/en_US/games/detail/new-pokemon-snap-switch/.

Trainers can head over to the Explore the Lental Region site now to begin their early explorations at ExploreLental.com. The site will only be available until May 31, so be sure to join in on the fun!