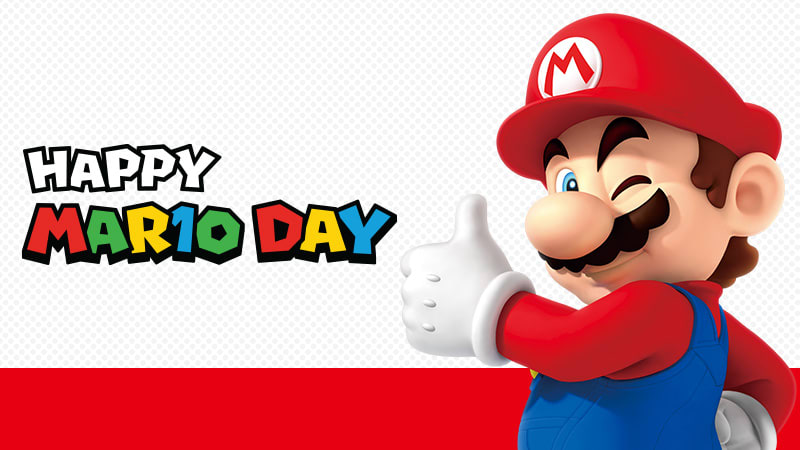 Happy MAR10 Day! Have fun with this ‘stache of Mario games.

If you’re looking for some super games that feature Mario, here’s a handy list for you:

In the Super Mario 3D World game, choose from Mario, Luigi, Peach, and Toad and set off to save the Sprixie Kingdom by completing imaginative levels solo or with friends*. In the Bowser’s Fury adventure, Mario joins forces with Bowser Jr. to venture through Lake Lapcat to stop a giant Bowser.

Pre-order available. Tee off with family and friends in this content-packed Mario Golf game! Modes range from Standard Golf to the energetic Speed Golf and an RPG-like golf adventure in story mode. Releases on 6/25/21.

The nefarious King Olly has sent a crease-and-desist to Princess Peach’s castle—binding it with five mighty paper streamers. Mario now needs to join an unusual cast of do-gooders to unfold this plot.

Available at no additional cost for Nintendo Switch Online members***. 35 players will try to be the last Mario standing as they race against time, defeat enemies, and sabotage their opponents in a fast-paced online battle. It’s classic Super Mario Bros. gameplay with a competitive twist! This game will be playable until March 31st, 2021.

You can play a nearly limitless number of side-scrolling Super Mario courses anytime, anywhere. You may want to start with the 100+ built-in courses in the single-player Story Mode or try making your own courses. And with a Nintendo Switch Online membership***, you can share your courses, access courses made by others, enjoy online multiplayer, and more!

Team up with Mario, Sonic, and friends on the Nintendo Switch™ system in action-packed sporting events! Bring your best in-game moves to the track, the gym, the ring, or the water in dozens of different party games everyone will enjoy.

Two games in one, for double the fun! Save the Mushroom Kingdom as Mario and his pals in the New Super Mario Bros. U game or let his green-clad brother, Luigi, take center stage in the New Super Luigi U™ game.

Gaming icons clash in the ultimate brawl. If you’re new to the series, Mario is a great all-around fighter to start with.

This definitive version of the Mario Kart 8 game includes the original game with DLC characters and tracks, along with Smart Steering; an optional feature which makes driving and staying on the track easier for beginners!

Along with his hat-shaped friend, Cappy, Mario embarks on a massive, globe-trotting 3D adventure! Capture and control certain objects, animals, and enemies on your way to disrupt Bowser’s wedding plans.

Gather your friends* and family together because everyone is invited to this party! Compete head-to-head or work together in fun minigames.

Unleash an arsenal of shots and strategies in all-out tennis battles with friends*, family, and fan-favorite Mushroom Kingdom characters.

Mario and the gang must team up with a whole new crew: four Rabbids heroes! Together, battle with weapons through worlds filled with combat, puzzles, and unpredictable enemies.

Available at no additional cost for Nintendo Switch Online members***. Play some classic Super NES games with added online multiplayer and the ability to share your screen.

Available at no additional cost for Nintendo Switch Online members***. Play some classic NES™ games with added online multiplayer and the ability to share your screen.