Part 4: Continue working to create an even better gaming experience

So far we have heard that since the release of Nintendo Switch in 2017, based on user reaction and technological advances during the product life cycle, which is unique to dedicated video-game consoles, you have considered improvements, and those results have led to Nintendo Switch – OLED Model’s “visible” and “invisible” changes. However, at the beginning of the interview, you mentioned that there were improvement ideas that came from trial and error that are employed on the current version of Nintendo Switch. Could you elaborate on that?

9 SoC stands for “System on a Chip.”  A semiconductor chip on which many of the functions necessary for system operation are built. In this case, this is the semiconductor chip that includes the CPU and GPU—the heart of the Nintendo Switch system—and other related functions.

The battery life is greatly influenced by the power consumption of the SoC, namely, the CPU and other components needed to run the game programs.

Shiota: That’s correct. The original power consumption during gameplay was about 12 W but it has been reduced to about 7 W. Strictly speaking, it's not only the SoC, but the power consumption of the surrounding memory has also changed. With the advancement of the semiconductor technology, Nintendo Switch has also been making continuous progress enabling lower power consumption. That all results in an extended battery life, which is another value we were able to offer to our customers.

Yamashita: As an example of battery duration, when playing The Legend of Zelda: Breath of the Wild, battery duration 10 was increased from approximately 3 hours to approximately 5.5 hours. So it almost doubled in duration. While we were developing the SoC, we also had the idea to implement this feature of longer battery life together with a new model, like Nintendo Switch – OLED Model, but we felt that there was no reason not to launch it immediately when it was technically ready and would benefit the customers. Therefore, we have introduced these features as regular “improvements” to the Nintendo Switch system.

10 Approximate length of time. The battery life will depend on the playing environment, including the games you play.

I would assume these were quite major changes, but still they were introduced as “improvements” of the existing Nintendo Switch system.

Yamashita: Yes. As a result, this model was distinguished as “the model with extended battery life.” Even though it’s a long description, we felt the longer battery life was a big benefit we should let the consumers who use their Nintendo Switch system outside the home know about. Well, I remember the first time I saw the model being distinguished this way, I was surprised because it was a quite straightforward explanation. (Laughs)

Shiota: By reducing the power consumption, we were able to create a dedicated portable model, the Nintendo Switch Lite system, which was among our original possible future ideas. For the handheld-play-dedicated model, the battery duration has an even greater importance. I believe the improvement of the SoC was very effective as well in making these things happen.

Another major characteristic of Nintendo Switch is the Joy-Con controllers. A big part of the user experience comes from the Joy-Con, but were there any improvements?

Yamashita: Joy-Con controllers have lots of different features, so we’ve been continuing to make improvements that may not always be visible. Among others, the analog-stick parts have continuously been improved since launch, and we are still working on improvements.

The analog stick at first release cleared the Nintendo reliability test using the method of rotating the stick while continually applying a load to it, with the same criteria as the Wii U GamePad’s analog stick.

As we have always been trying to improve it as well, we have investigated the Joy-Con controllers used by the customers and repeatedly improved the wear resistance and durability.

The parts of the Joy-Con analog sticks are not something that can be bought off the shelf but are specially designed, so we have undergone a lot of considerations to improve them. In addition, we improved the reliability test itself, and we have continued to make changes to improve durability and clear this new test.

When the effects of our improvements were confirmed, we promptly incorporated them into the Joy-Con controllers that are included with the console, Nintendo Switch Lite, and the ones sold individually, that were manufactured at that time. This involves the internal components of the Joy-Con, so you can’t tell the improvements from the outside, but we use the new versions of the parts when we repair them. Also, similar continual improvements have been made for the Nintendo Switch Pro Controller as well.

Do you mean that, basically, wear is unavoidable as long as the parts are physically in contact?

Shiota: Yes, for example car tires wear out as the car moves, as they are in constant friction with the ground to rotate. So with that same premise, we asked ourselves how we can improve durability, and not only that, but how can both operability and durability coexist? It’s something we are continuously tackling.

I believe what you have told us is that these changes are not limited to the Joy-Con, and you are continuously making small improvements on various aspects of the hardware.

Yamashita: Yes. This attitude is one that we’ve had in the past and will continue to have in the future. Hearing customers’ opinions, we have been thinking about what we actually wanted but couldn’t do at the release of Nintendo Switch in 2017 and what we think can make customers happy once realized, and one culmination of this process is Nintendo Switch – OLED Model. Having said that, we will have more ideas where we think “this will get even better if we can do this!” with regards to Nintendo Switch – OLED Model as well, so we won’t stop carrying out these investigations going forward. At Nintendo we tend to say that whenever we release new hardware, we immediately start thinking about the next one. But this doesn’t only mean that we’re always working on new-product development, but also that we are constantly working on what can still be done to products even after they are released.

Shiota: The technologies Nintendo employs for its hardware are widely investigated and tested. And we have to think thoroughly about how to bring these technologies to customers. We sometimes apply new technologies to products that are already released to make them even better. When we feel that particular technologies have a potential to deliver a completely new experience to customers, then they may be applied to new products. What triggers this is often the engineers’ work on technologies born from their smallest curiosities. Their outlets differ, with some ideas going public as “improvements” and some others becoming new products. I believe that development members are thinking deliberately every single day about using technologies in Nintendo’s unique way. 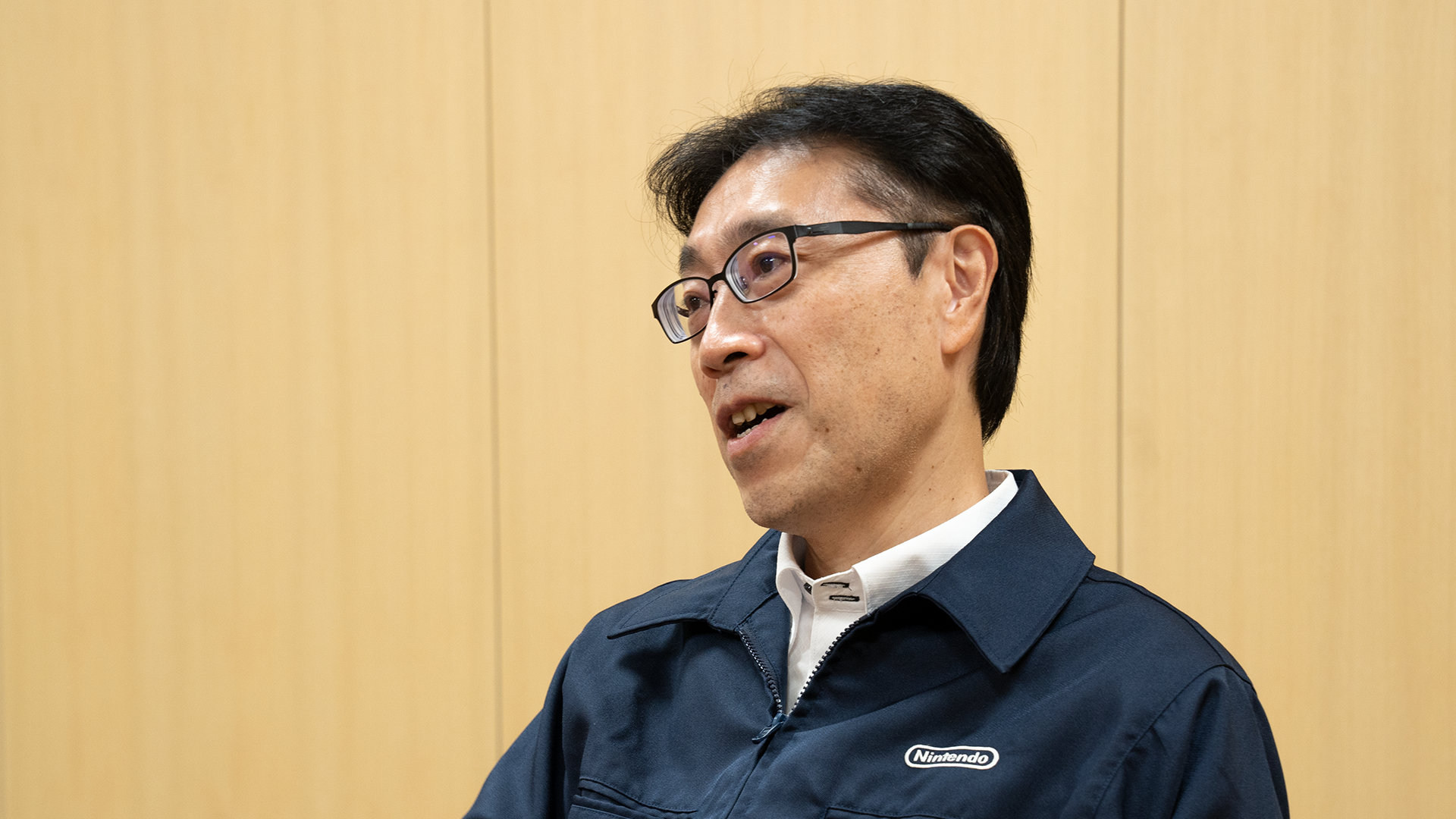 Are customers’ opinions influencing this?

Shiota: Yes. Regarding improvements in particular, we believe we have to listen closely to our customers’ opinions. There are many cases that the opinions of customers who are actually playing our products trigger improvements. Having said that, I think a different way of thinking is required when we create completely new products. What I mean by this: our mission is to offer new kinds of entertainment to customers. Thus, when we develop new products, we must keep the following in mind: “How can we deliver our ideas and technologies that we have been cultivating in order to propose new entertainment?” And to accomplish that, developing the hardware is not enough. We believe that we have to be united with the software development to create new entertainment experiences. We often say “integrated hardware and software approach” 11, but it is exactly what is happening at the development scene. It is perhaps one of Nintendo’s strengths that members with different strengths in both hardware and software fields are working together in a friendly competition, blending together.

Did this philosophy already exist at Nintendo when you joined the company, Mr. Shiota?

Shiota: For as long as I’ve been at Nintendo, it’s never changed. These days, I have an impression that there is a tendency in many industries to outsource more and more design and improvement-related tasks. However, Nintendo continues to work in-house to achieve even better gaming experiences. As we have told you today, we can talk about stands and speakers ourselves because we are designing them ourselves. This reflects the Nintendo hardware-development culture, and we’re glad if by getting a glimpse of this culture, you could sense a little of that through this interview.

Thank you so very much.