So far we’ve talked mainly about “visible changes.” Next, could you talk about some of the changes in Nintendo Switch – OLED Model that can’t be seen from the outside?

Yamashita: In terms of “invisible changes,” first of all I can talk about how the internal storage has doubled from 32 GB to 64 GB. We made this change because more users are choosing to purchase the digital versions of games, and we wanted users who have filled up their Nintendo Switch system’s internal storage to still have space if they upgrade to Nintendo Switch – OLED Model. You can also insert a microSD card in the console to increase storage capacity, but it’s always easier to have lots of storage from the moment you get it, so we’ve increased it.

One more “invisible change” you mentioned at the beginning was the onboard speakers. You only explained that they are new before, so what exactly has changed?

Yamashita: The speaker parts themselves were changed. If you listen and compare them, you’ll be able to notice the difference. In order to make use of the changed speakers, we had to redesign the mechanism that leads to the produced sound and the structure around the speakers. The screen is bigger, but this means less space inside the console. So it was a lot of work from a technical perspective to work out how to make the audio better. However, for people playing multiplayer games in tabletop mode or for people playing in handheld mode, we wanted to make the audio much clearer, as well as the screen much bigger and easier to see.

Were new onboard speakers part of the original plan for the new model?

Yamashita: During the development of the new model, we wanted to achieve the same or better audio quality and acoustic pressure than existing Nintendo Switch models. When we tried using the open-type speakers , which we were using on our previous models, in the new model, we found that due to design restrictions, the sound ended up being quieter than before. We made some attempts to see if we could improve the design keeping the same speakers, but in the end we decided to use closed-type speakers , where the sound quality and pressure can be increased thanks to the back of the speaker being sealed. 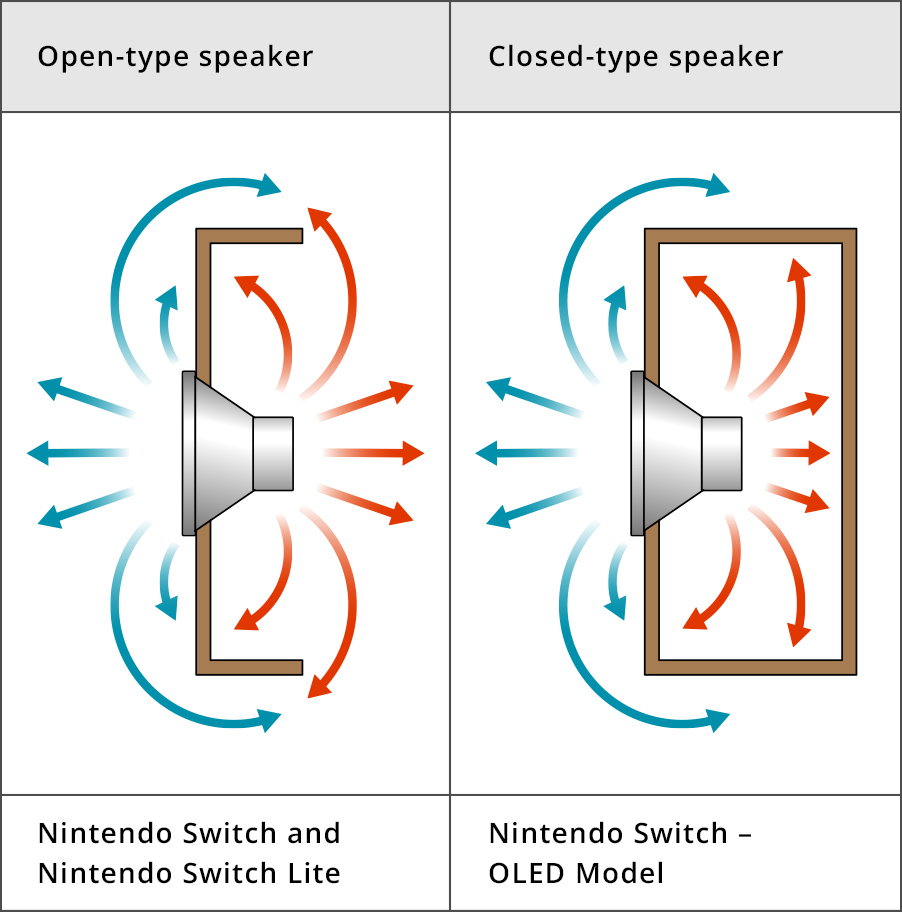 But doesn’t the sound get muffled if it’s sealed?

Yamashita: Speakers produce sound from both the front and back by their vibrations. Closed-type speakers produce a clearer sound by preventing the collision of sound coming from the front and back. These closed types are often also used in smartphones and tablets, but those devices mostly use speakers that are already manufactured in a closed format and are incorporated as is. But, in order to adopt speakers that would be as big as possible within the limited space inside Nintendo Switch – OLED Model while producing satisfactory audio quality and acoustic pressure, we needed to use the structure of the console and design a sealed space at the back ourselves.

Yamashita: Yes. If the seal is not intact, then the audio quality would be reduced despite changing the speakers. So the biggest challenge was preparing a space to install the speaker while assuring there is space for the sealed area, to create clearer vibrations within a limited space.

We talked about the sound from the speakers being louder, but did this change the power consumption?

Yamashita: Strictly speaking, the maximum amount of power that can be sent to the speakers is higher than the current Nintendo Switch models. In actuality, however, speakers aren’t usually used in a way to constantly output their maximum volume, so overall there is barely any difference in power consumption.

Shiota: Still, the maximum power consumption happens when it’s outputting at the maximum volume, so we have decided the settings by considering the balance of how much power we should allow it to use and by considering the circuitry as a whole. From an overall perspective, changing the speakers hasn’t led to a reduction of battery life.

Yamashita: With this new model, we have challenged ourselves to adjust, without changing the circuitry itself, the various settings in order to create a clear sound while enabling as much volume as possible, and this setting adjustment was extremely difficult.

Shiota: Rather than independently improving the speakers, mechanical design, and power, like with the OLED display, all developers combined many minor adjustments to increase the performance of the speakers overall.

Yamashita: Speaking about the adjustments of the speakers, a developer who worked on the sound adjustments has noticed that he could more easily detect the abnormal sounds using the sound of a piano, so he was adjusting the sounds with the piano piece that he himself composed. He said he had never imagined that an engineer like him would ever compose music.

Ah, I see. It seems like there are lots of small ideas and tricks hidden here. Is there anything else you’d like to share that’s hard to notice but has actually changed?

Yamashita: We’ve changed all kinds of other small things, but first I’d like to say that we have changed the location of the standards and regulations information that was on the back of the previous Nintendo Switch models.

It is indeed a cleaner and more straightforward design. Where did this information go?

Yamashita: It’s on the inside of the stand. I personally think it’s pretty good. We display it in a way that people can refer to it when necessary.

Sounds like that’s one of the things you personally were particular about during the development, Mr. Yamashita.

Yamashita: Also, even though it is a very small point as well, the central logo on the Joy-Con grip is engraved, not printed. 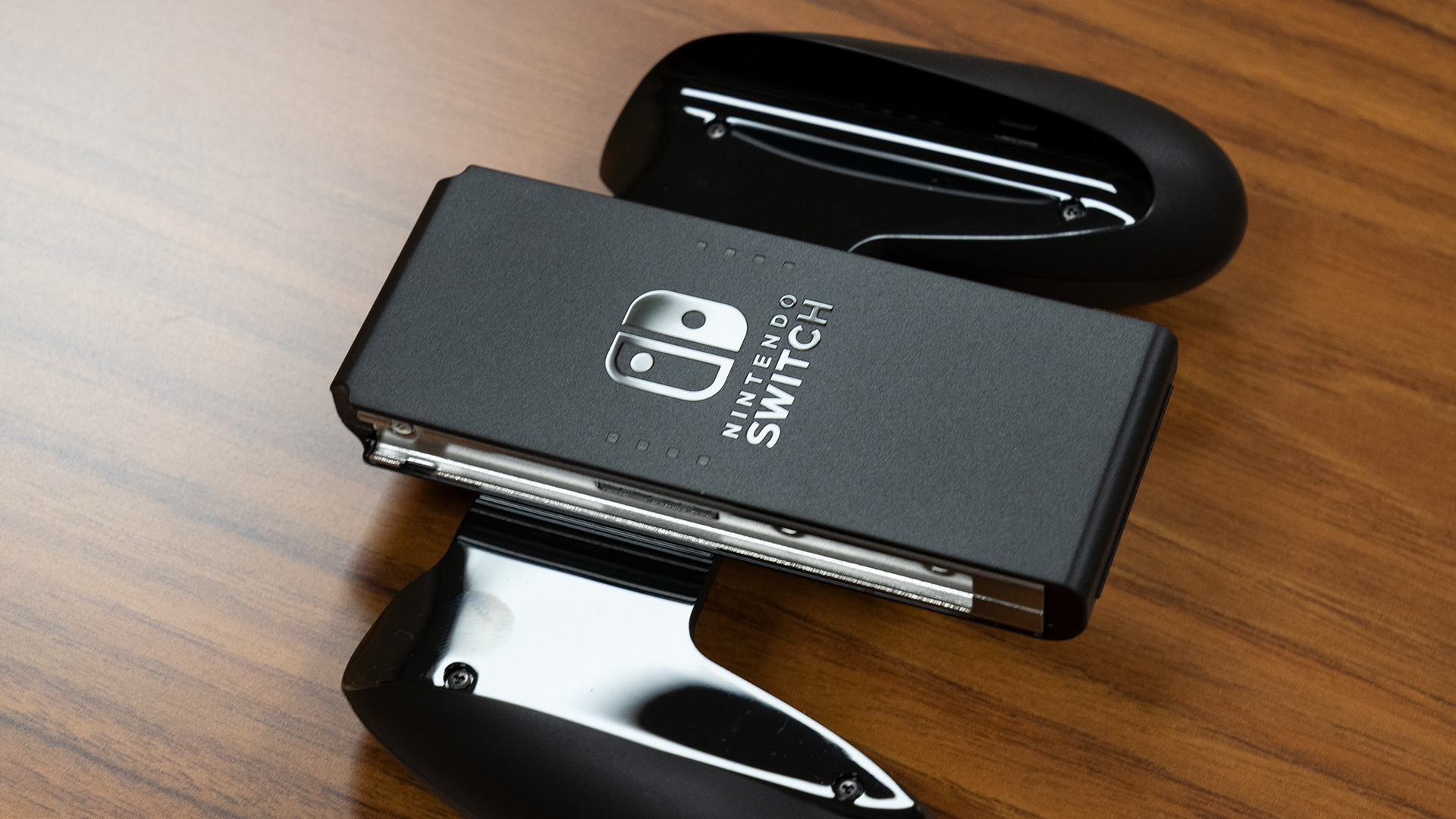 In addition to that, we changed the design of the Joy-Con strap as well, with white dots, so I would like to use this opportunity to casually promote this (Laughs). 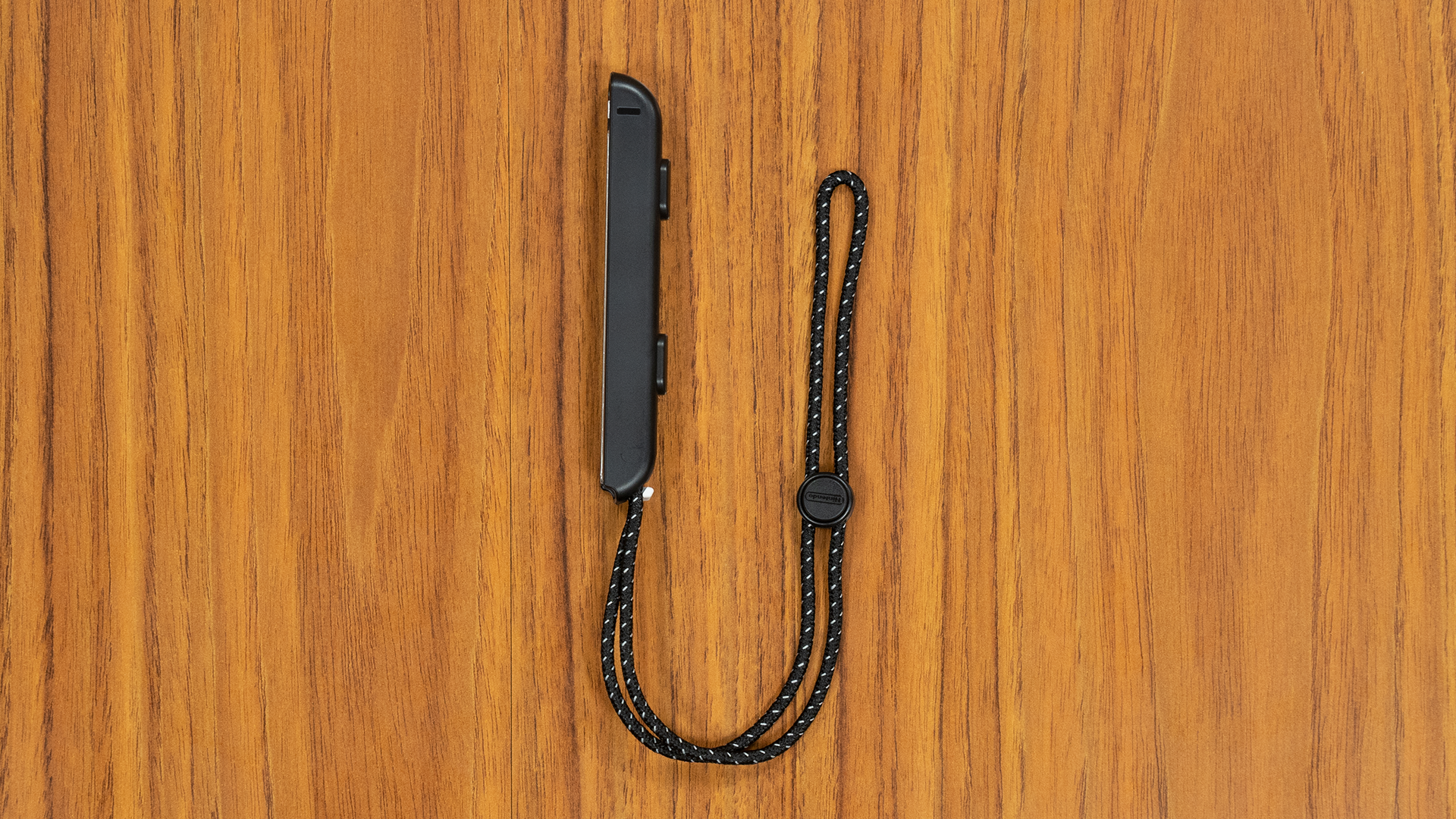 The HDMI cable is also different. I quite like this change; please feel how flexible it is.

(Touching) Indeed, softer than the one that was previously included.

Yamashita: Improving cables has been considered for a long time, and some of our staff had been working on it, and it happened to align with the release of Nintendo Switch – OLED Model. 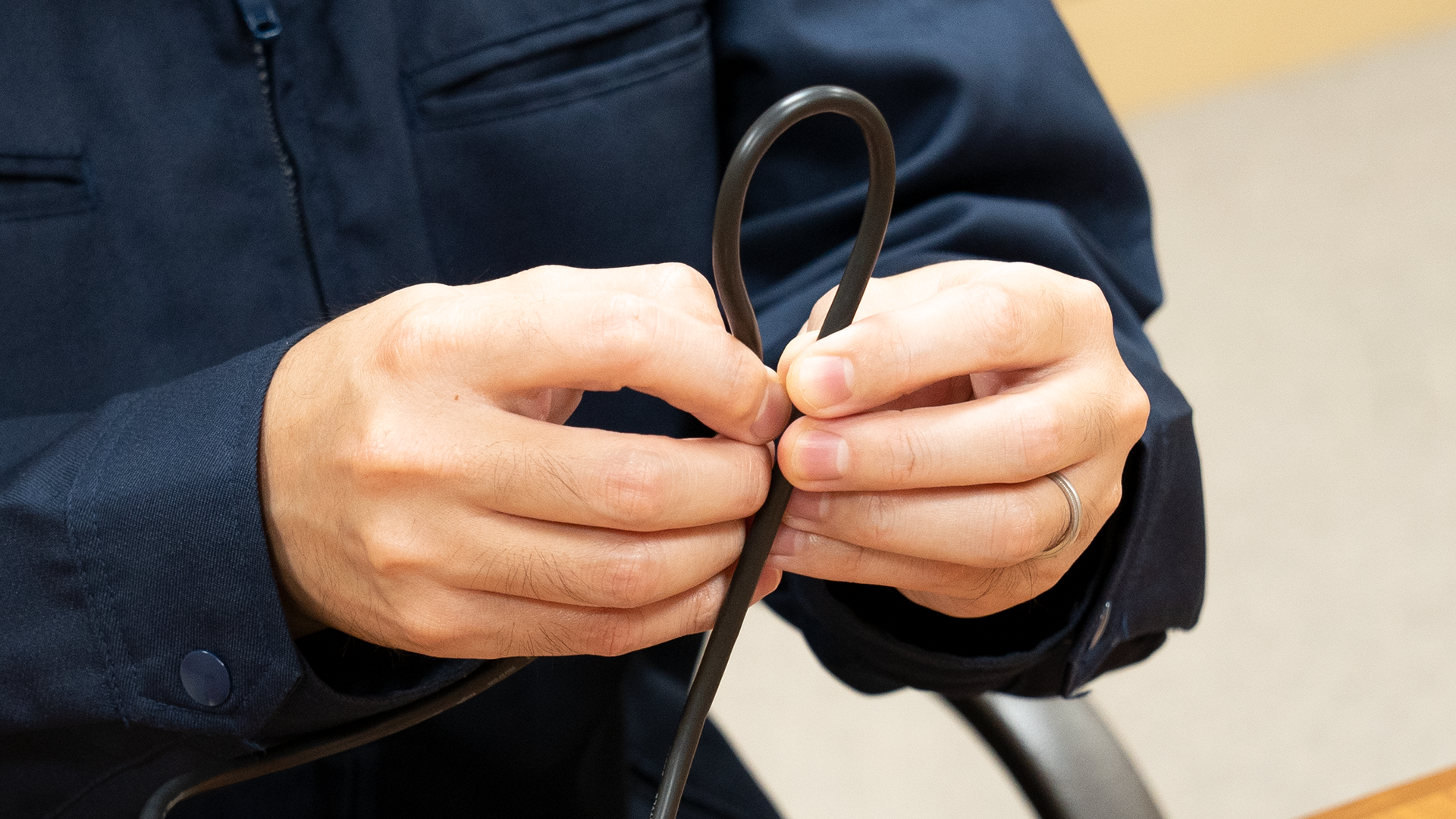 Also, the back lid of the dock on the existing model had a gap that enables users to route cables for both directions, but many users do not know that... 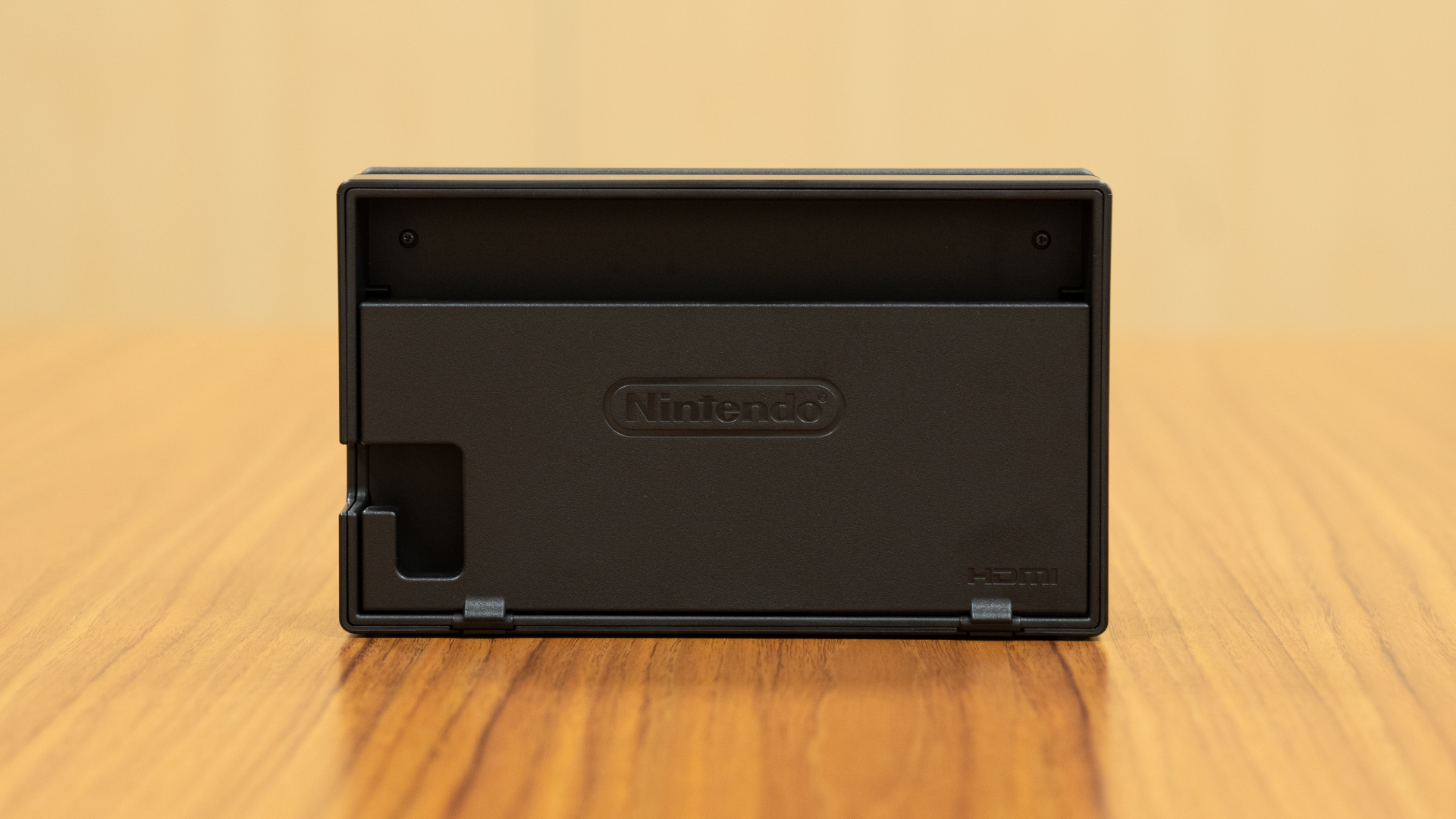 We have even heard some users leave the back lid open.

If you keep the back lid open, the lid may get in the way.

Yamashita: Yes. Therefore, we have made changes so you can remove the lid more easily, and we changed the shape of the groove so the cables can be a bit looser, as there is now an additional wired LAN cable 8 that can come out from the dock along with the HDMI cable and power cable. This is the part where we have asked the designer to redesign it to improve the ease of use without compromising the exterior design. 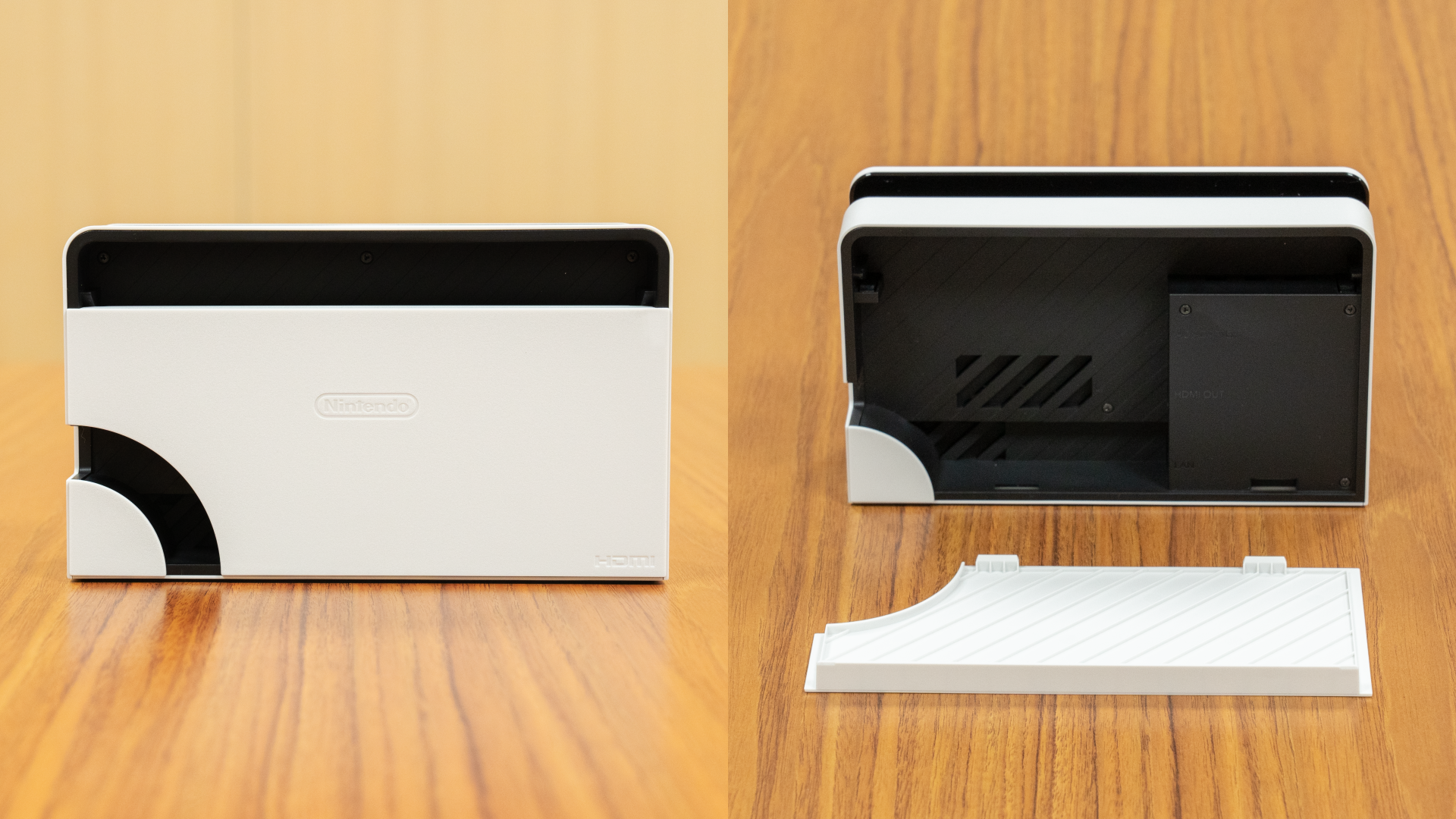 Making it easier to organize the game console in each home is related to user satisfaction, right?

Yamashita: Yes. For example, for those who need to remove the HDMI cable often because of the environment of their setup, I think it is more convenient for them to remove the back lid. These small changes might make you think they are just simply design changes for the look, but we made these changes to actually improve usability according to each individual’s needs.

It was surprising that there are many fine detail improvements, but they are all important for the user experience.