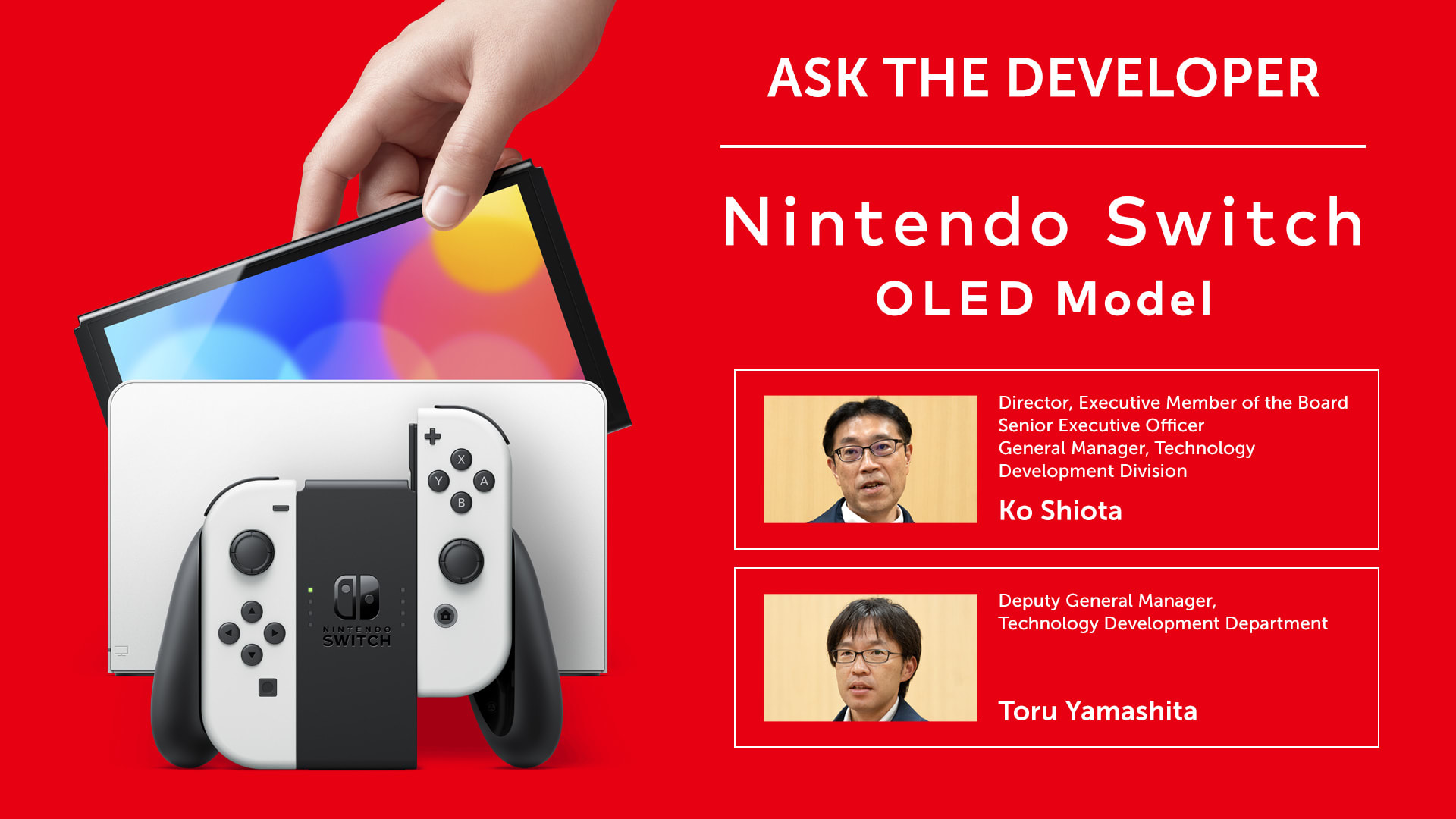 Yamashita: Of course. First, the newly adopted OLED display is able to express colors vividly, and the screen size was increased from 6.2 inches to 7 inches. I think that you will immediately see how large the screen is as soon as you pick it up.

However, the development of this model was not actually decided solely based on adopting the OLED display, even though it is the most distinctive feature of this model. The OLED display technology itself existed in the Nintendo 3DS 7 era, and we were continuously investigating its technological trends, but it did not quite match with our conditions, and it was never adopted for Nintendo game systems. However, the number of products equipped with OLED displays is increasing around the world, and the technology has been improving. So upon verifying and reinvestigating with our partner companies on what conditions were possible for what we needed for our game console, we determined it was the right time for us to adopt the technology.

7 A portable gaming system released in 2011 that allows you to experience stereoscopic images with the naked eye.

Were you thinking of increasing the screen size from the beginning？

Yamashita: Originally, we did think about making the display larger. On this model, we made the screen larger, and in turn made the bezel surrounding the screen narrower. So one of the biggest challenges in making improvements to reach this new model was trying to increase the screen size while maintaining the console’s size and product strength.

Shiota: This OLED display uses organic material that enables display of vivid colors. Also, a deeper black can be displayed, so there’s a stronger contrast between white and black, and it’s now possible for a crisp color display. However, we needed to fit all the peripheral parts necessary to display images on the OLED screen—like the integrated circuits and cables—into the narrower bezel. It would’ve fit in the bezel width of the existing model, but it wouldn’t work in the same way this time around. So we consulted with the display manufacturer, and ultimately, we put the integrated circuits on a film and folded this film back into the bezel.

Yamashita: Also, even though the colors have gotten more vivid with the OLED display, some customers may feel like the colors look too vivid. Taking that into consideration, we made it so that the player can select a standard color mode, to make it look like the conventional LCD display. If you prefer the vivid colors of the OLED display, you can keep it in the vibrant color mode that is default out of the box.

I see. So you can choose your preferred color style as you like. So it seems it’s not just a simple matter of a brighter or bigger screen with this OLED display.

Yamashita: It was important not just to make the display more vivid but also to make the display itself thinner. These are part of the “visible changes,” but it also enabled us to make the stand bigger. The stand is used for tabletop mode, where you play by placing the console on a table, but you may experience glare depending on the angle of the screen. So we made it so that you can change the angle of the screen, making it easier to see and to create your ideal playing environment. In order to fulfill this while maintaining its size, it was necessary to reduce the thickness of the display itself.

I see that portion of the unit has actually become thinner, in order to fit the stand.

Yamashita: It was made thinner, and to achieve the freely adjustable stand, we equipped large hinges, and we also calculated the space so that the hinges fit properly in the console. The console has gotten bigger by only 3 mm horizontally, but it was determined that if we extended it just by these 3 mm, the hinges and the stand would fit neatly in the back. This is the part of the design that we pushed the limit on. 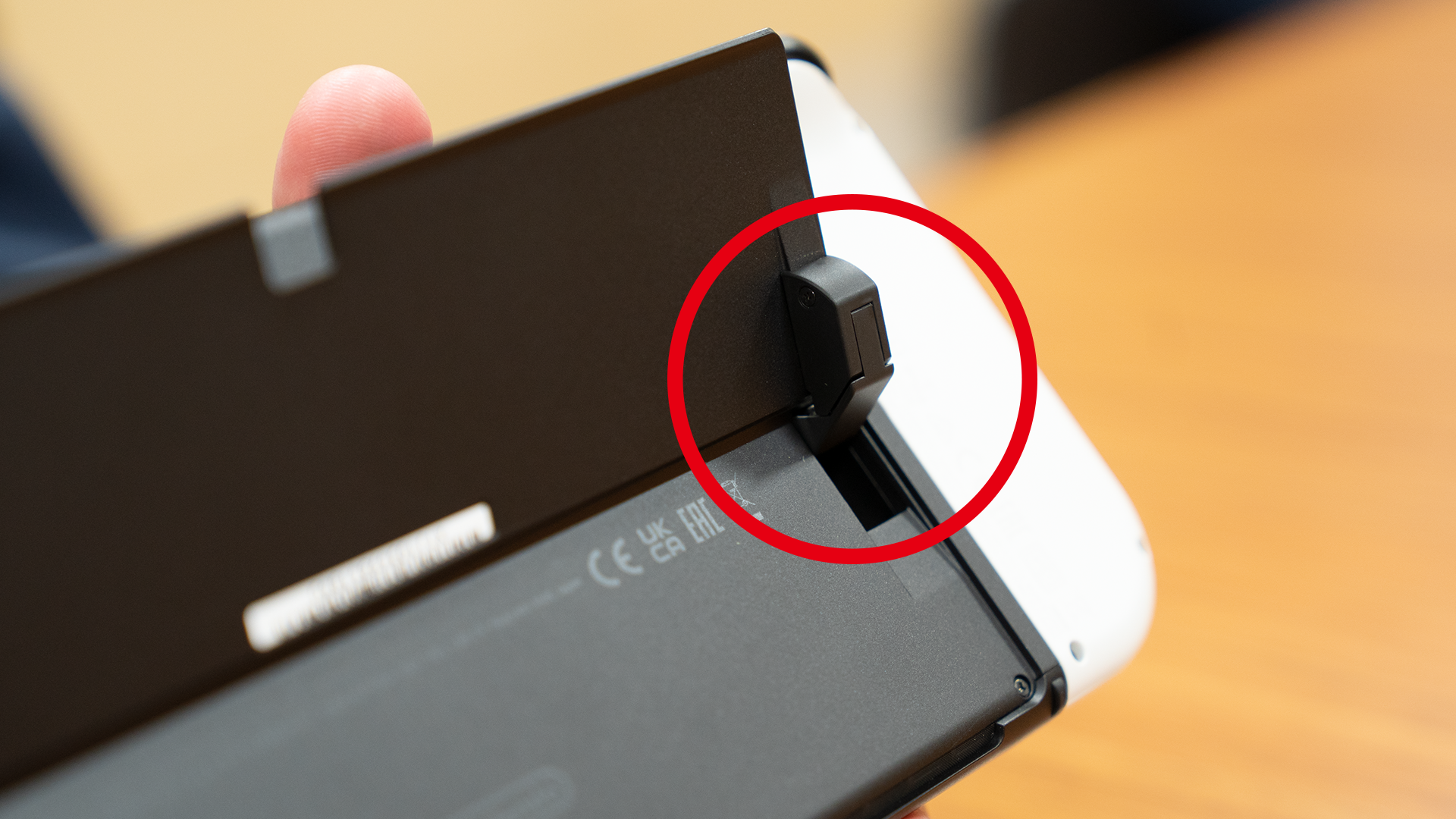 As you mentioned, the console did not change in terms of height or thickness.

Yamashita: Yes that is correct. The width of the console has increased by 3 mm, but the thickness and height have not changed. Nevertheless, the display area has grown from 6.2 inches to 7 inches. It was a difficult task to fit two bigger hinges on the console under such circumstances. In order to establish this design, it was necessary not only to adopt a thin OLED display, but to also come up with a new layout so that the parts inside the console, such as the board, display, rechargeable battery, etc., are laid out in a tightly condensed form. Therefore, there was a lot of trial and error here as well, trying to figure out the configuration to accommodate both the hinges and the stand.

Shiota: The thickness of the console hasn't changed from that of Nintendo Switch, so it was like the hinges and the display were fighting over the limited space (Laughs).

And you didn't want to change the thickness of the console?

Yamashita: No, in terms of the compatibility of Nintendo Switch – OLED Model being able to fit in the existing Nintendo Switch dock, the thickness isn’t something we could easily change. Also, if we made it thicker, then there would be a gap when you attach the Joy-Con controllers. That wouldn’t be a good fit, so making the console thicker wasn’t an option. By the way, we changed the material for the stand from plastic to metal, and this is because compared to plastic, metal can be made thinner while still maintaining its strength. This is another thing that isn’t mentioned on the official website, but you might notice when you try it out.

Shiota: We could make the stand thinner by using metal, but because the surface area of the stand was bigger, even with the thinner OLED display it still wasn’t enough. The people in charge of the stand and the display discussed things like changing the thickness of the display screen cover, and in the end they worked together to make many adjustments, stretching the limits. 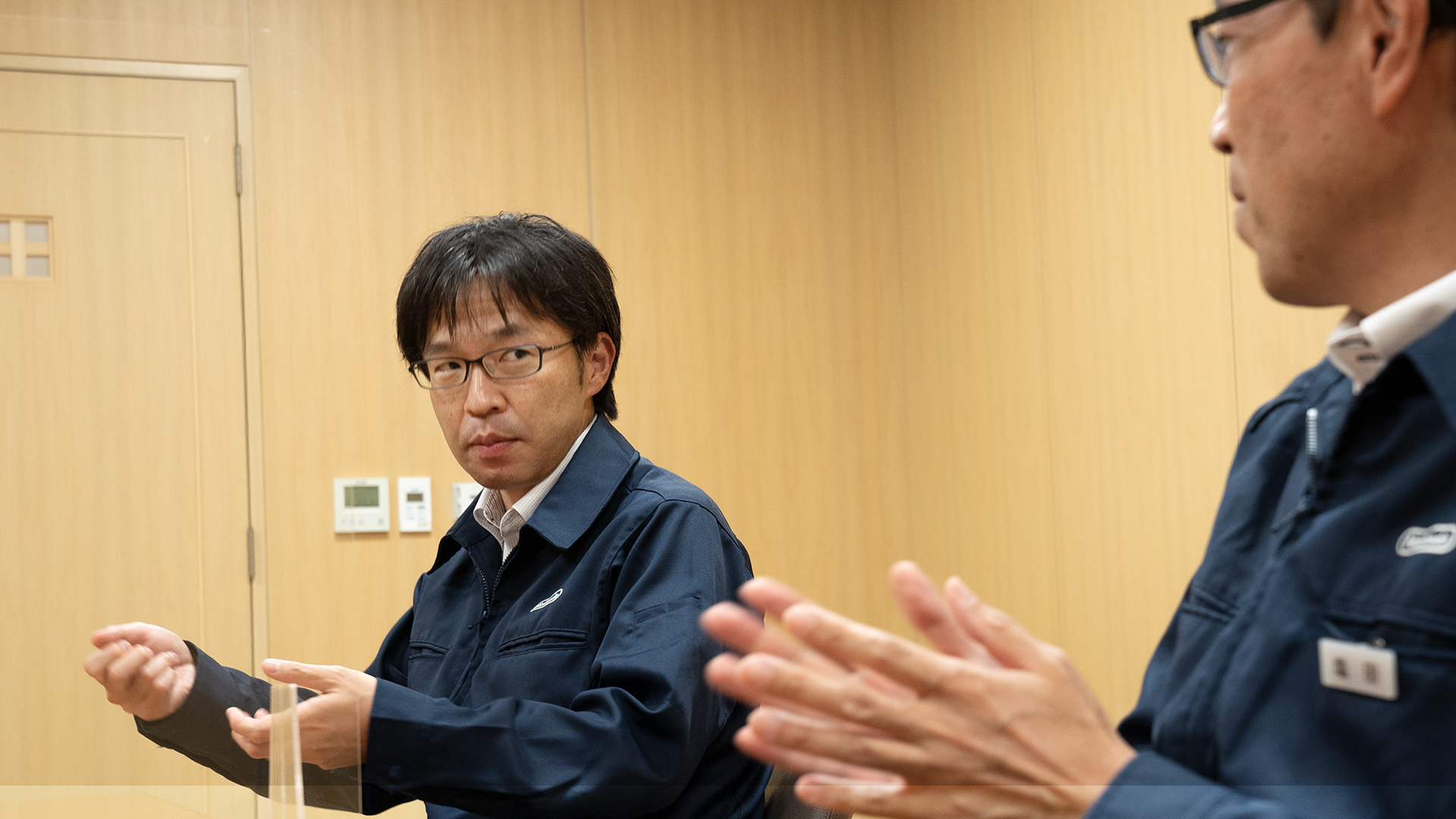 Is the device heavier because of the new metal stand?

Shiota: To have hinges that can support the stand at any angle already makes it pretty heavy, but when you replace plastic with metal, even at the same volume, it will be considerably heavier. But, for the overall weight of the console unit, it’s an increase of only about 20g. To put it differently, it’s because we scaled down in other places. Even with the original Nintendo Switch, we naturally tried to scale down everywhere we could to make it as light as possible, so it was not easy to find something we could scale down even further. But thanks to the help of the mechanical engineers, they came up with various ideas of scaling down while still maintaining its strength, and I believe we were able to achieve our goal.

The stand is the fruit of great labor.

Yamashita: Incidentally, we took into great consideration how much pressure was needed when opening the stand. Of course, you want it to be stiff enough so that it feels stable when it’s open. But on the other hand, if it’s TOO stiff, the customer might...

Have difficulty opening it?

Yamashita: Yes, it may be hard to open, and they might worry and think, “Should it be this hard to open?” So in order to achieve the right “stiffness” to play in tabletop mode while also making it feel comfortable opening and closing, we thought it should be on the “softer side” of the range. To find that right stiffness, we made a number of samples with various stiffnesses which would be feasible within the structural limitations and chose the right one through trial and error.

Even this kind of thing must be thoroughly tested...

Yamashita: Lots of people were working on the design, like the ones responsible for the stand and for the display, but it’s not like all of them were independently coming up with separate approaches for improving each part. Rather we were cooperating together with the common goal of bringing out the best of Nintendo Switch while maintaining the console size and weight as much as possible, and we worked out the layout within the console through trial and error. As a result, elements like increasing screen size, using an OLED display, and strengthening and increasing the size of the stand all came together like pieces of a puzzle, and the prototype for this OLED Model started to come together.

Ah, I see. So this combination of different parts created the overall Nintendo Switch – OLED Model.

By the way, are there any other visible changes, apart from the OLED display and the stand?

Yamashita: Including the OLED display and the adjustable stand has improved the experience in handheld mode and tabletop mode, so we thought about whether we can also improve the experience in TV mode, when it’s connected to the TV. And so we included a wired LAN port on the new dock. Recently, even TVs and DVRs have started including wireless LAN connections, and there are situations now where too many devices at home are using a wireless connection. For these people, using a wired LAN connection will mean they can play comfortably online without any interference from all the other wireless devices at home. It’s a small change, but it should be an improvement to the TV mode experience.