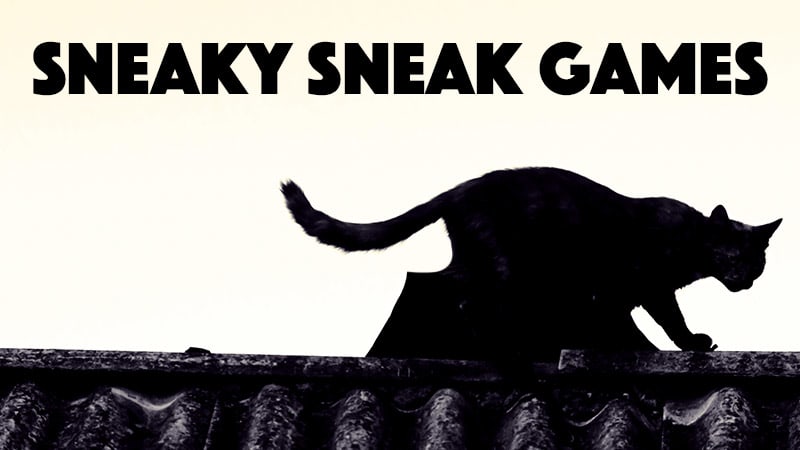 Take to the shadows (or really tall grass) in these stealthy games!

Stealth comes in all shapes and sizes: from furtive ninja assassins to folks just trying to make it out in the wild. The following games may not be entirely about stealth, but each of them encourages a bit of sneakiness from time to time.

(And if you’re not great at stealth, you can do that thing where you try to be super sneaky for the first five minutes, get spotted, and then run around while screaming. Like…that’s common, right?

Wait, what was that sound? There seems to be an Imposter among us…

Play with 4-15 players online* or via local WiFi** as you attempt to prepare your spaceship for departure. Just beware as one or more random players among the Crew are out to get you. Whether you’re part of the Crew or an Imposter, good luck sneaking around!

Wait, we included a Pokémon game?! It may be unexpected, but in this game, you have the option to be stealthy when catching wild Pokémon—you can even distract Pokémon with berries or hide in tall
grass. If you haven’t played a Pokémon game in a while, you may be surprised to see what else this one has in store.

In this suspense-filled adventure game, you play as Mono, a young boy trapped in a world that has been distorted by the humming transmission of a distant tower. The game includes some scarily stealthy sequences, like sneaking around in a creepy school.

This game is all about tackling challenges how you want to…even if that means sneaking around enemies because you only have one Tree Branch left in your inventory as a weapon. Of course, you can also try sneaking around and then roll a boulder onto them when they’re not looking…

Mark of the Ninja

To be a ninja, you must be silent, agile, and clever to outwit your opponents. Marked with cursed tattoos that give you heightened senses, every situation in Mark of the Ninja presents you with options. Will you be an unknown, invisible ghost, or a brutal, silent assassin?

Wait, geese can be stealthy? Untitled Goose Game is a slapstick-stealth-sandbox, where you are a goose let loose on an unsuspecting village. Make your way around town to set up pranks, steal hats, and do some excessive honking. A second player can also join in with the two-player cooperative mode**.

You are Aragami, a vengeful spirit with the power to control the shadows. Teleport to any shadow, become invisible, materialize weapons, or even summon a shadow dragon to infiltrate the enemy ranks and dispose of your targets.

Enter the Sevastopol space station to finally solve the mystery of Ellen Ripley’s disappearance. Of course, there’s also very large something that will get in your way (you can probably guess what). Unprepared and underequipped, you will need all your wits and daring to evade your hunter and get out alive.

Mark of the Ninja: Remastered