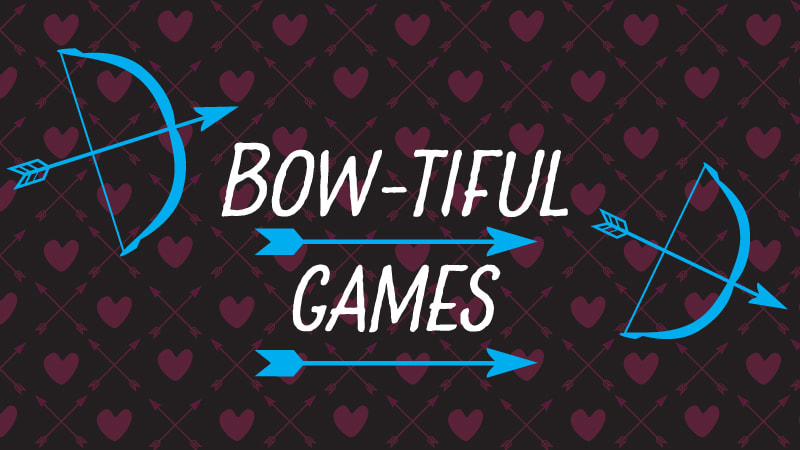 These days, you don’t have to be a mythological flying baby to fire off a few (digital) arrows—you just need the right game.

This small selection of games lets you put your archery skills to the test. Get ready, aim, and fire away in these games where you can wield your trusty (in-game) bow and arrows!

As the immortal Prince Zagreus, you must defy your father (the god of the dead, Hades) to escape the Underworld. Luckily, the Olympians have your back! Wield a variety of powerful mythic weapons, including Coronacht, the Heart-Seeking Bow. Increase your weapon’s strength with permanent upgrades and try different builds through each run with the help of Boons bestowed upon you by the Olympians. (Pro tip: Each weapon’s form has its own perk, so save up your Titan Blood to unlock them!)

The Legend of Zelda: Breath of the Wild:

After a 100-year slumber, Link wakes up alone in a world he no longer remembers. Now, the legendary hero must explore a vast and dangerous land and regain his memories before Hyrule is lost forever. While you’ll acquire a variety of weapons to use in combat, remember that there’s more to fighting than just weapons. You’ll have to learn different attacks—like high-flying bow shots and making use of explosives—in order to prevail.

As Fenyx, a winged demigod, you’ll embark on a quest to save the Greek gods and their home from a dark curse. To defeat Typhon, the deadliest Titan, the gods of Olympus have blessed you with divine powers and weapons, including the bow of Odysseus. You’ll have to draw upon your wit and abilities to solve puzzles and take aim at legendary beasts. Remember that you can also try using your bow to take down those pesky flying enemies.

Join the fight for the future in the world of Overwatch*. Choose your hero from a diverse cast of soldiers, scientists, or assassins, like Hanzo Shimada. Use Hanzo’s Sonic Arrow to reveal enemies within its detection radius; instantly fire off a barrage of arrows with the Storm Arrows ability; or use the Dragonstrike to summon a titanic Spirit Dragon that will pass through walls, devouring enemies it encounters.

Explore randomly generated worlds and build to your heart’s content in Minecraft. Try to survive and thrive in Survival Mode, where you’ll battle enemies, construct shelter, and explore the landscape. If you’re looking to get the drop on aggressive mobs from a safe distance, consider using a bow and arrows. This ranged weapon can be crafted, found, or obtained in several ways. It’s very popular! Just remember to grab a few arrows before you leave the house.