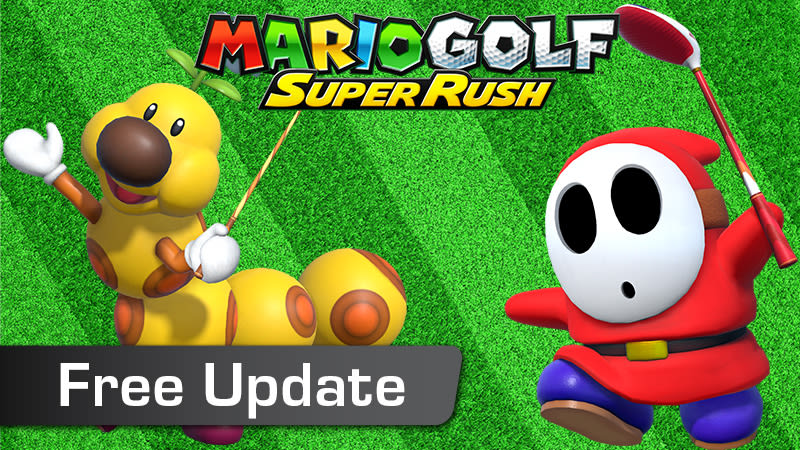 Grab your golf clubs! The Mario Golf™: Super Rush game brings even more action to the fairway with additional playable characters, modes, and courses in a new update.

He may seem a bit bashful, but don’t sleep on Shy Guy—he’s all business when it comes to hittin’ the green. With evenly balanced stats, Shy Guy can adapt well to any game mode. This flexibility makes him a great starting character for newcomers to the series or folks experiencing a different mode for the first time.

And who’s this next cutie?

Oops! Don’t let the flower and adorable face fool you. If you make Wiggler angry, it’s ready to putt up a fight! Wiggler can take on the competition with brute strength. Wiggler can become angry if it’s hit or when using its Special Shot, temporarily increasing its stats and making its face mighty red.

You can challenge your friends and family to the multiplayer mode, Target Golf! In this mode, up to four players* can take turns hitting the ball at a target. The closer to the target your shot hits, the higher you’ll score. You can even include different settings and items to heat up the competition.

Play your pals near or far on the same system, locally, or online**. But if you’re looking to challenge yourself, you can also try the Solo Challenge version of Target Golf.

If you’re ready for a different single-player challenge, you can try the newly added One-On, One-Putt Solo Challenge. Here, you’ll try to sink the ball in two shots: one shot to hit the green, the next shot to sink the ball. Test your skills and see if you can beat your last high score!

Looking to squeeze in a game? You can try out Shelltop Sanctuary. This course will allow you to play 18 holes with par 3, meaning the goal is to complete each hole in three strokes or fewer.

You can also mix up your view by trying the new All-Star Summit. This distinct course is based on Mario Theme character art and intricately created using coins, clouds, blocks and more!

See you on the green!