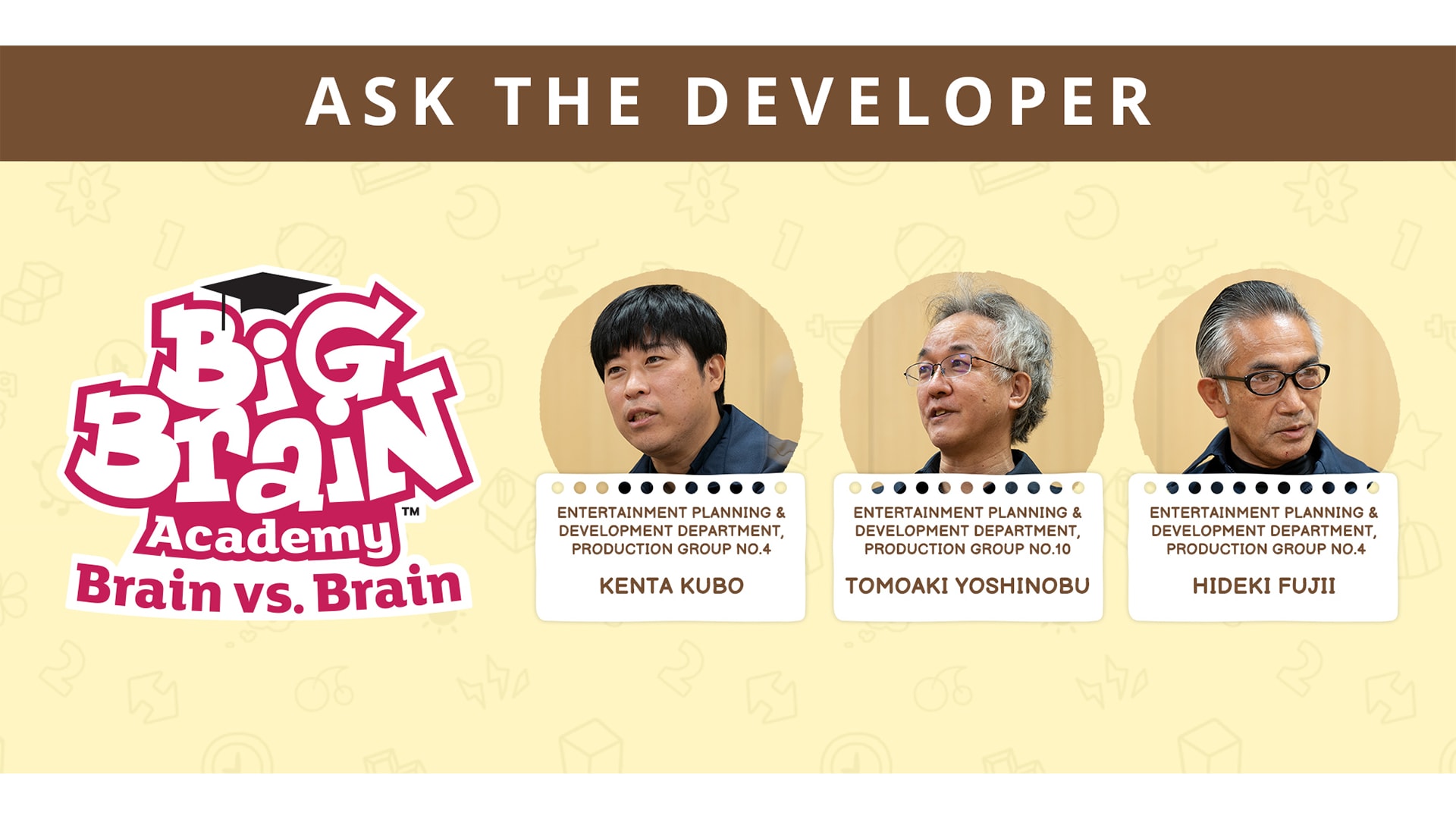 Part 3: Serious vs. serious: Compete without holding back

Big Brain Academy: Brain vs. Brain features a new mode called "Ghost Clash." Can you please tell us about it?

Kubo: Yes. Your “Ghost” is your play data generated from playing Practice and Test in the main mode.  All of your in-quiz behaviors, such as the timing of selecting answers, which answers you selected, the movement of the cursor, and so on are recorded as the Ghost data and uploaded to the internet server.

I see. The Mario Kart™ series 12 has used the same mechanic. It has players compete against “ghosts,” which are the records from other players.

Kubo: Yes. Using online features 13, this title allows you to battle Ghosts from around the world in the Practice mode's minigames.

12 An action-racing game series in which players compete for ranks and time by racing karts on various circuits with Mario and other characters in the driver's seat. Since the first title was released in 1992 on the Super Nintendo Entertainment System™ in the U.S., the series' titles have been released on systems such as Nintendo 64™, Nintendo DS, and Wii.

Kubo: We wanted a wide range of consumers to play as much as possible, so we wanted to make something casual instead of a competitive real-time match.

Fujii: Since it's a Ghost match and you're not competing directly against someone in real time, I like that you don't have to feel as much pressure. This game makes you feel like it's a competition of brain-bending activities, and sometimes things can heat up and leave even adult players feeling frustrated when they lose. But when you compete against Ghost data, you can play without hesitation and whenever it's convenient for you. You can play in secret and never reveal your results to your opponent. I thought I could even call it an "invention."

Kubo: Thank you. When you play against Ghosts from around the world, it shows your results, but your opponent doesn't get notified. This way, I think players can challenge others without feeling self-conscious.

Real-time online matches are a bit nerve-racking, aren't they? You can't even go to the bathroom during overly long matches. (Laughs)

Kubo: Yeah...I understand. No one wants to lose. (Laughs)

Yoshinobu: The Wii version also had Ghost-style matches, but they were limited to Ghosts of your friends who you had exchanged friend IDs with. But now you can play with Ghosts from around the world online on Nintendo Switch.

Kubo: Yes. Unlike real-time matches, you don't need to wait for the other players to turn up, since the Ghost data from around the world is already waiting for you. This means that you can be matched straightaway with players at just the right level for you. And you can even do Ghost battles against family members on the same system without using online features.

I see. So you'll be able to play against someone anytime, whenever you feel like it.

Fujii: Talking about Ghost battles has reminded me of a story from the time of the Wii version. One day when I got home, my child was waiting in the hallway to excitedly tell me about beating my Ghost. To which I responded, "We'll see about that..."

Kubo: Aha, so then a battle started in your living room.

It's nice that you can do Ghost battles with your child even when you're busy with work. You can battle with friends and family without setting a time.

Kubo: Also, for the Ghosts in this game, we worked hard to make sure you feel like you're playing against a real person. We wanted to give you the sense that you're actually playing with someone, even though it's just their play data.

And how did you manage that?

Kubo: For this game, we made it so that you can customize your own avatar. For example, when someone is answering a question during a quiz show, the face of the person answering appears on-screen so you can tell who it is. 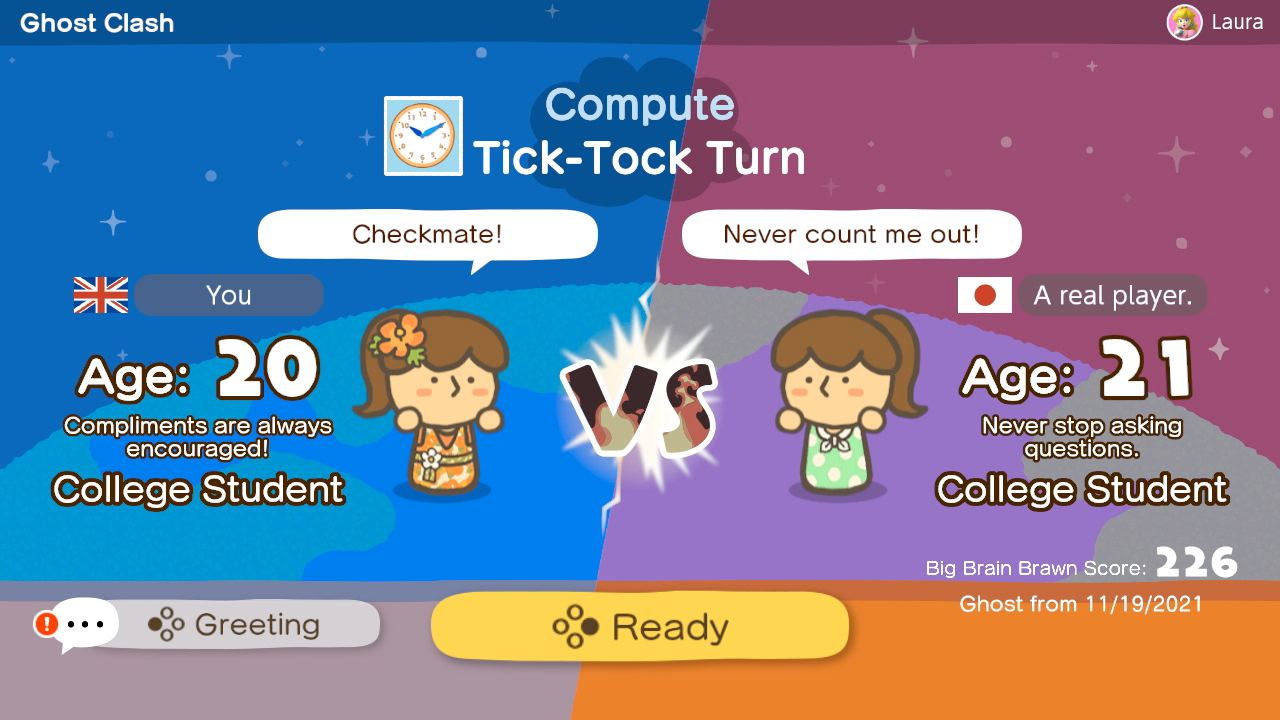 That's true. Even if it's just a Ghost, if you can see a face, then it feels like you're actually playing against someone.

Kubo: Also, we made it so that you can set an age for the avatar. This is a battle of brain-bending activities, so we wanted to make the opponents' ages clear—for example, whether it's child vs. adult or adult vs. adult. Of course, it's also possible to make your age a secret. Additionally, you can select things to add individuality to your avatar, like a catchphrase, occupation, or outfit.

Fujii: Office Worker vs. Manager... That combination must also be fun. (Laughs) In the main Practice mode, as you play through the game, you'll unlock more items for your avatar, such as clothing and hats. You can enjoy seeing how other players have decided to dress up their avatars. Among the development team, we played Ghost Clash battles with lots of different people, and there were some people with rather eccentric tastes in clothing... (Laughs) It's fun seeing how the personality of an individual shines through. 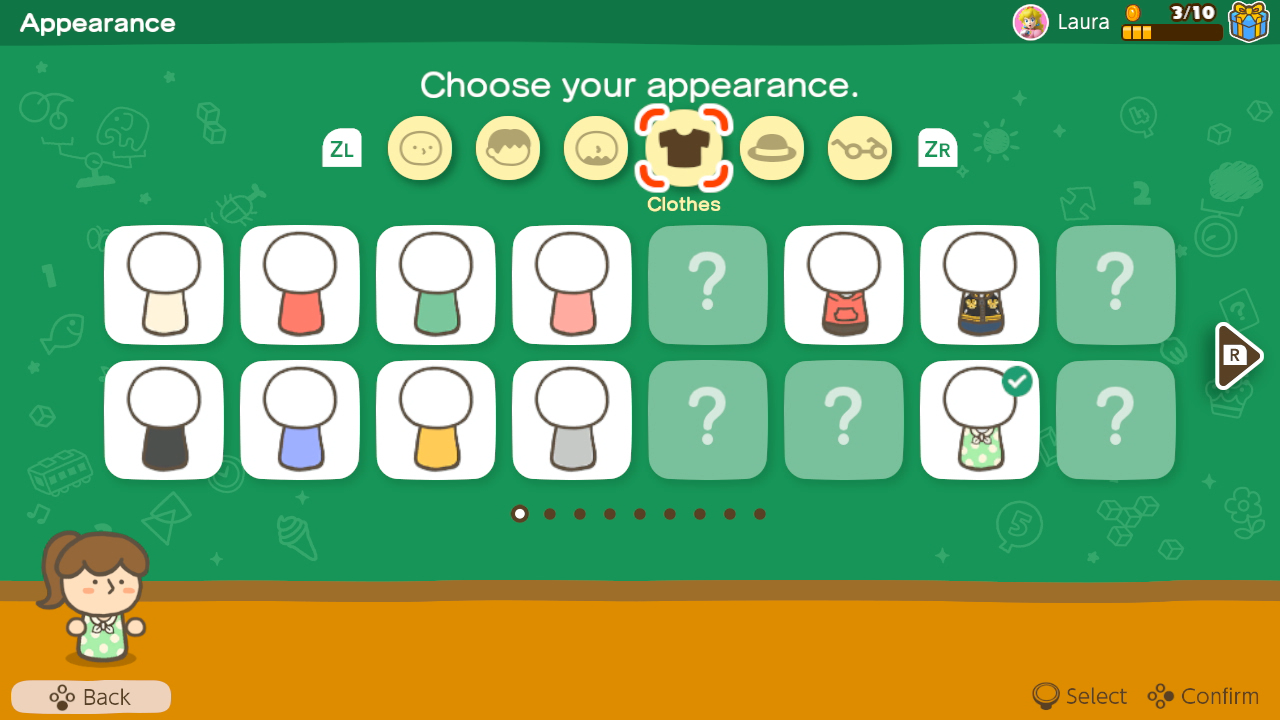 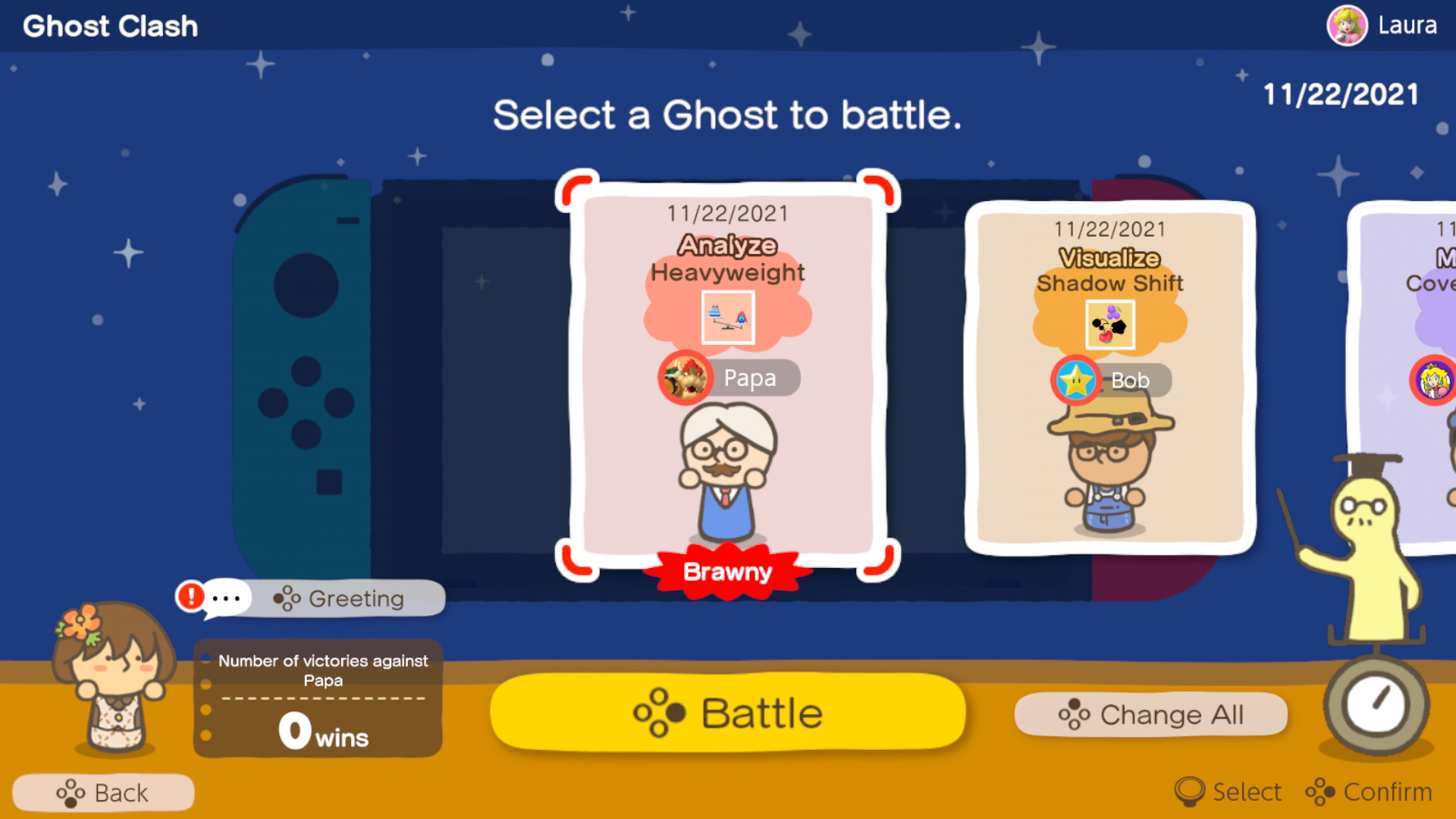 Are there any other features unique to this game?

Since we're all here, shall we give it a go? Come on, Fujii-san! Let's spin the wheel to decide on a minigame.

Fujii: Oooh, Balloon Burst! This is a good one!

Yoshinobu: Oh, I messed up!

Fujii: This is good. Playing facing each other with touch controls like this really makes it feel more immediate and personal. 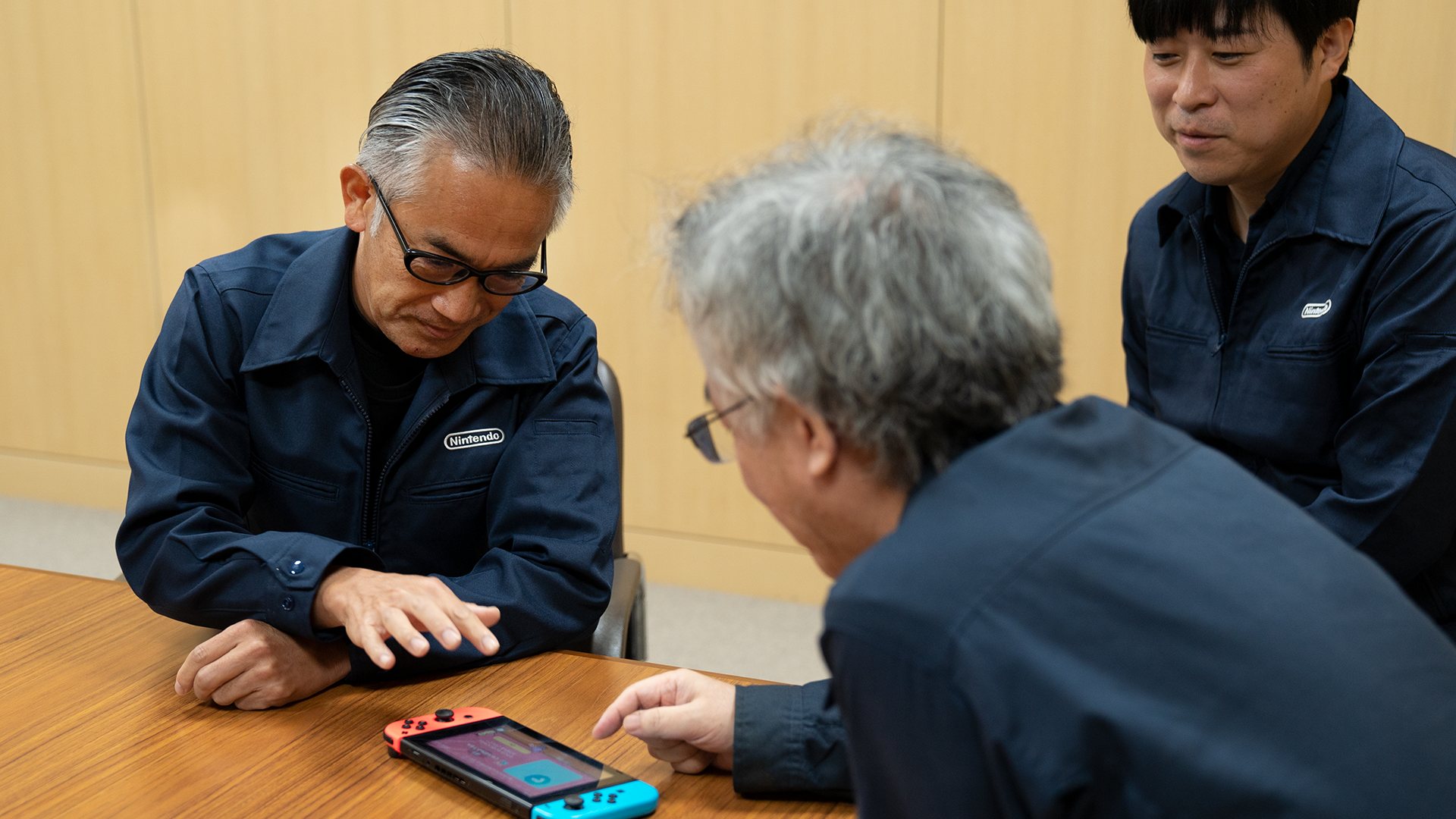 Yoshinobu: When the first official trailer for this game was released and I saw two people sitting facing each other using touch controls on a single Nintendo Switch system, I was extremely happy. It's exactly these touch controls that I felt were carrying on the legacy of this relationship between parent and child that we had originally imagined.

Kubo: We also fine-tuned it so that it's fun to play with a controller too, so I hope players will try out both.

The game has a Party mode 14 that you play with multiple people. What would you say its strengths are as a party game?

Kubo: You can start playing straightaway, even without prior experience or knowing the rules. Also, each player can select their class, which means they can adjust the difficulty level for themselves. When playing against each other, each player can choose a difficulty from Sprout Class to Super Elite Class.

So, for example, a young child and a parent can play on equal terms by selecting Sprout Class and Advanced Class respectively. This means that even in combinations like child vs. parent or gamer vs. non-gamer, everyone can select the class that fits best for them, then play without holding back. It's often the case that when children and parents play against each other, the parents will hold back so they're on the same level—but children are actually surprisingly good at seeing through this. So by having different difficulty levels for children and parents, it allows both of them to try their hardest. If it's not balanced, then the person who wins increases their class by one. And then both players can play seriously against each other.

Fujii: I haven't done it in a while, so I think it'll be Sprout Class for me... 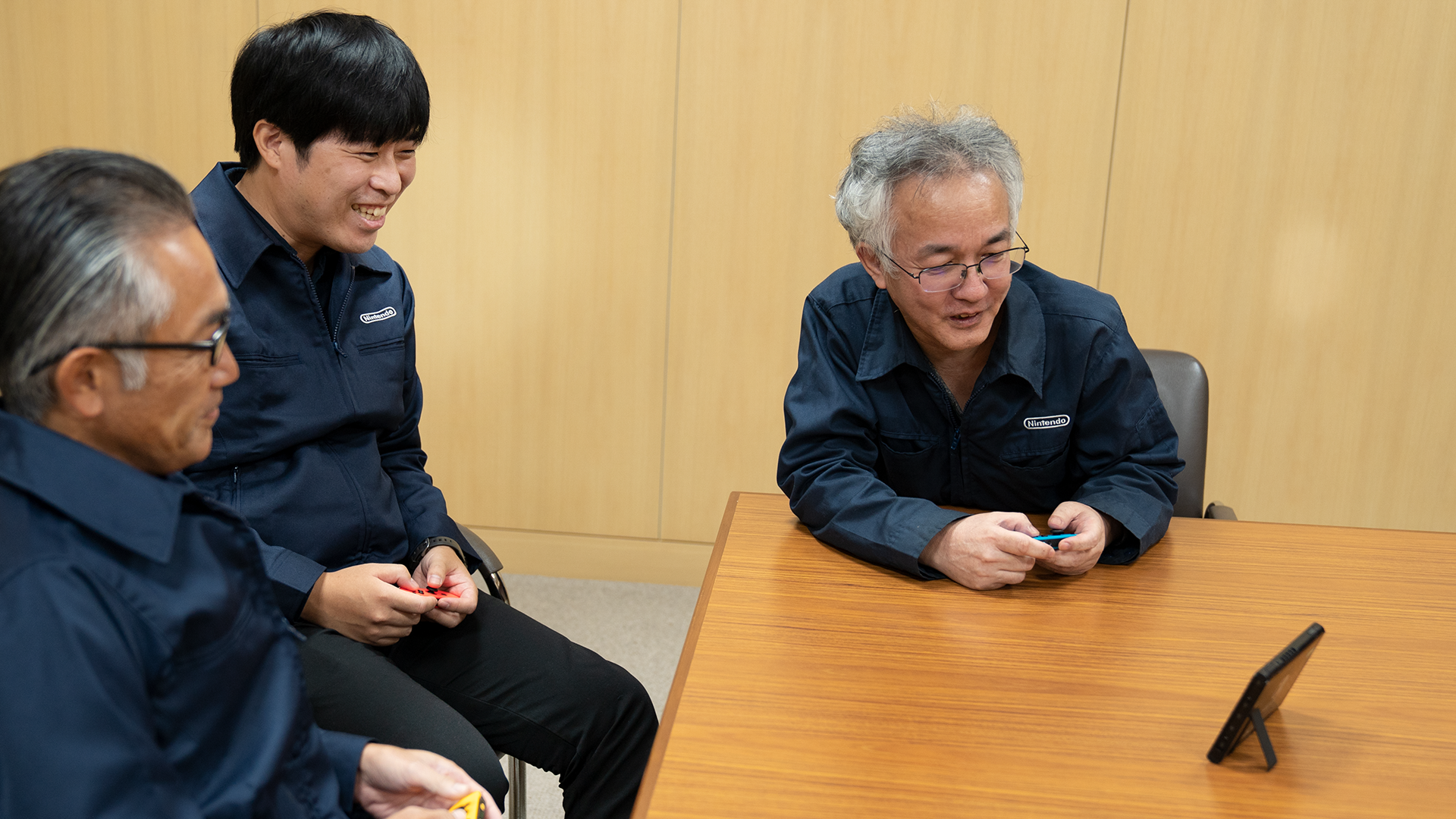 Yoshinobu: It's great that you get so seriously into it that even as adults you start making sounds like those.

14 Additional accessories may be required for multiplayer mode. Sold separately.

I can really see how much you're all enjoying it. (Laughs)

Kubo: Along with the class changes, we've implemented other features. For instance, we made it so that the person who loses gets to choose the next minigame so they can pick an activity that they're good at.

Fujii: I see. You're right. A fun aspect of Big Brain Academy is that everybody has strengths and weaknesses in different categories.

Kubo: That's right. For example, a child might be better at Memorize than an adult, or there might be two people the same age, one good at Identify and the other at Analyze. So different people win with different categories.

Fujii: Exactly. It's exciting to say things to each other like, "You really are the type of player who can intuitively identify things."

So by being able to choose the difficulty class and the category, you can really compete against each other seriously.

Kubo: It's fun when both people can try to do their best instead of having to hold back. It’s serious vs. serious. We want people to enjoy competing without holding back.

I'm sure there are fun times ahead as people meet up this holiday season, and there may be some unexpected defeats when they play against each other. (Laughs)

Kubo, Fujii, and Yoshinobu: (Everyone laughs)

Kubo: If you're confident in your skills, then I hope you try playing against someone else in the Elite or Super Elite Classes. There will be lots of challenging tasks, so I believe you'll get really into it!

Now, to wrap up, I'd like to ask each of you to give a comment on how you want people to play the game.

Fujii: This is a game that can be enjoyed by people of a wide range of ages, so I hope they will all enjoy it in their own ways. Friends can compete in a battle of the brains, or families can play together, enjoying the feeling of solving things as parent and child and as a gateway to learning. I also hope it inspires conversations between grandparents and grandchildren.

Yoshinobu: Of course, I hope a wide range of players will enjoy the game, but I especially want players to use this game as a communication tool between parents and children. I'm hoping this game provides a starting point of opportunities for parents to be more engaged and involved in their children’s learning, even beyond the game. For instance, they can solve problems together while they're studying, and parents can support an environment for their children to be able to enjoy studying. This, I believe, will lead to everyone smiling.

Kubo: For a household with younger children, I want them to play together. And for those who want a game that they can play casually and quickly, I think this one is a good option. For advanced players, the difficulty levels are precisely categorized, so I think they will find it rewarding to play.

Do you have anything to add for fans of the Nintendo DS and Wii versions of Big Brain Academy?

Kubo: You can receive a medal for each activity based on your score, and for those that are familiar with the franchise, let me just say that we have, of course, a hidden, highest medal, which will be rather challenging to get. Furthermore, once you obtain all the gold medals, you unlock Super Practice, which is a challenging mode that gives you Advanced Class activities from the get-go. For those of you confident in your skills, please enjoy this feature as well!